Sharing the risk of lockdown

In the wake of the unprecedented economic shock of the Covid-19 pandemic, how can we prepare for the risk of similar catastrophes? 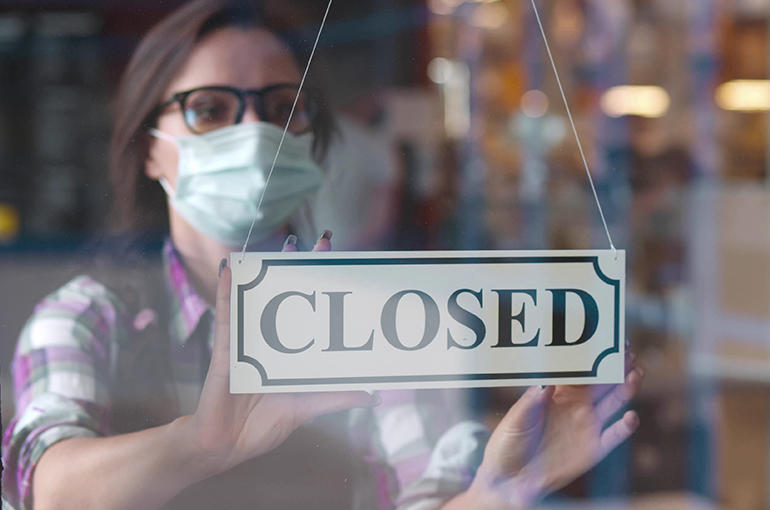 A new working paper by Toulouse researchers Jessica Martin and Stéphane Villeneuve, published with the support of the TSE - SCOR Foundation ‘Risk Markets and Value Creation Chair’, focuses on the optimal design of contracts, using a model that separates the contractors’ incentives from the external risk of a shutdown.

Stéphane Villeneuve explains the main findings of their research:

Should contracts include risk-sharing for pandemics?

The Covid-19 crisis has had serious consequences for entire sectors of the economy. Never before has the global economy come to such a standstill due to an external event. But large shutdown risks can also arise during other catastrophic events such as the massive bushfires that ravaged Australia towards the end of 2019, temporarily halting agriculture, construction, and tourism in many areas. As vaccination begins to offer a glimmer of hope for a way out of the pandemic, our research is guided by the perspective that we must learn to live with such risks.

Our paper tries to make its contribution by focusing on a simple microeconomic issue. In a world subject to moral hazard, how can we agree to an incentive contract whose obligations could be made impossible or at least very difficult because of the occurrence of a risk of a similar scale to the Covid-19 pandemic?

Including shutdown risk-sharing in contracts seems crucial for at least two reasons. First, it is not certain that public authorities will be able to continue to take significant economic support measures to insure the partners of a contract if the frequency of such global risks were to increase. Second, the private insurance market does not offer protection against the risk of a pandemic which makes pooling too difficult. It therefore seems likely that we will have to turn to an organized form of risk-sharing between the contractors.

How can we design contracts to prepare for such risks?

Economic theory has a well-developed set of tools to analyze incentive and risk-sharing problems using expected-utility theory. The extensive literature related to dynamic contracting through a principal-agent model has, so far, mostly been based on continuously governed (eg. Brownian motion) output processes. However, some recent works have introduced jump processes into continuous time contracting. Biais et al. were the first to do so (in ‘Large Risks, Limited Liability, and Dynamic Moral Hazard’, 2010) by studying optimal contracting between an insurance company and a manager whose effort can reduce the occurrence of an underlying accident.

Here, we extend the classical framework to include a shutdown risk. We do not claim that this model is general enough to come up with robust economic facts, but it has the remarkable advantage of being explicitly creditworthy, which allows us to find an explicit optimal contract that disentangles the incentives from external risk-sharing and allows us to understand the sensitivity of the optimal contract to the different exogenous parameters of the model.

Our work uses a jump-diffusion process to include the possibility for accidents to negatively affect revenue. In this, it shares some structural similarities with Capponi and Frei (‘Dynamic Contracting: Accidents Lead to Nonlinear Contracts’, 2015). Both models consider a risk-averse principal and agent with exponential utility and reach an explicit characterization of the optimal wage. However, our framework uses a different form of jump diffusion to enable the shutdown event to completely stop revenue generation in a continuous-time setting. The main novelty is the multiplicative effect of the jump risk: upon the arrival of the risk, the entire output process comes to a halt.

A key feature of our study is that the shape of the optimal contract is linear. More precisely, the agent’s compensation is the sum of two functions: the first is linear with respect to the output and serves to give the incentives; the second is linear with respect to the effective duration of the contract and serves to share the default risk. The contract exposes both agents to a risk of exogenous interruption but it has two different regimes that are determined by an explicit relation between the risk aversions and the agent’s effort cost.

Under the first regime, the agent is more sensitive to the risk of default than the principal. In this case, the principal deposits on the date 0 a positive amount into an escrow account; the balance of this account will then decrease over time at a constant rate. Note that the later the default arrives, the more the balance decreases to a point where it may even become negative. If default occurs, the principal transfers the remaining balance to the agent.

Under the second regime, the principal is more sensitive to the risk of default. In this case, the agent deposits a positive amount as a deductible into the escrow account, the balance of which declines as time passes and symmetrical reasoning applies. This linearity contrasts with the optimum obtained by Capponi and Frei as the additive contribution of their jump process to revenue generation leads to a sub-linear wage. This result is in line with studies elsewhere which prove that the agent must be rewarded or punished for a risk that is beyond his or her control.

What happens when firms invest in mitigation?

The Covid-19 crisis has highlighted the ability of humans and businesses to react and adapt when faced with adversity. We include such phenomena by allowing the principal to respond to a shutdown by investing in order to continue some form of (possibly disrupted) production. This is quite a natural and realistic variant on our initial model. When faced with lockdown, companies may for example invest in teleworking infrastructure, protective equipment or adapting their organization. Crucially, we find that in many circumstances, investing in mitigation of shutdown effects is not optimal for the principal. When it is, it is only optimal up until some cut-off time related to a balance between the cost of investment, the agent’s rents and possible remaining gain.

Stéphane Villeneuve is a professor of applied mathematics and former dean of the department of mathematics at University of Toulouse 1 Capitole, where he is affiliated with both Toulouse School of Management and TSE. He is also a member of the TSE-Partnership Foundation (TSE-P) where he coordinates the Chair on Market Risk and Value Creation sponsored by SCOR under the aegis of The Risk Foundation. His research focuses on stochastic methods in finance and their applications for dynamic contracting.

Learn more about the Risk Markets and Value Creation Chair

Learn more about the SCOR Foundation for Science 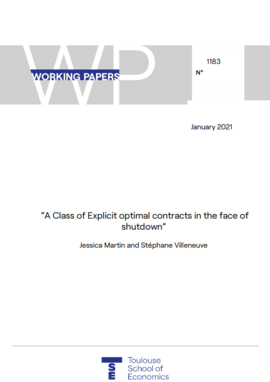