Simplified Underwriting – From A Behavioural Lens

Behavioural Economics may help find a balance between simplification of the underwriting process and the mitigation of risk. 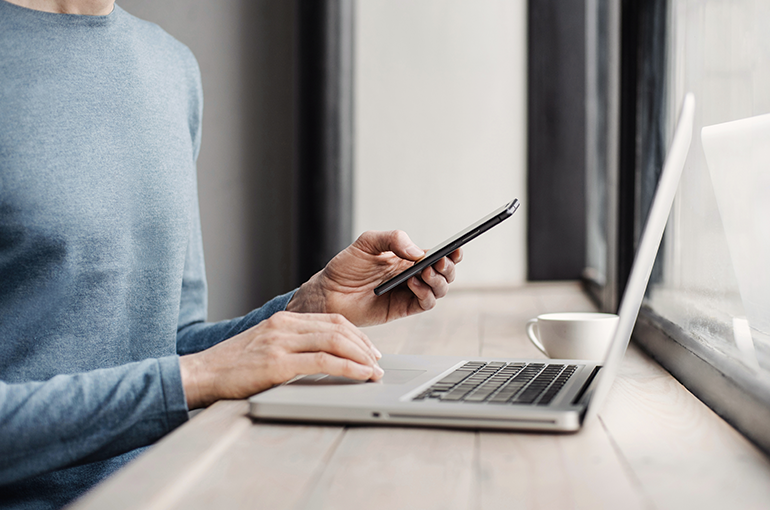 In the past decade, Simplified Issuance Offer (SIO) has gained tremendous popularity given its proposition in issuing more policies with shorter turnaround time and at lower acquisition cost. The SIO proposition has traditionally been popular in the context of Bancassurance as the channel demands seamless advice and policy issuance processes. In recent years, insurers have amplified this proposition in reaching out to agency, financial advisory and broking channel, complementing their regular product portfolio that are typically fully underwritten.

While consumers in general have benefited from the SIO proposition, there remains areas that warrant a more holistic consideration as the process of simplification needs to be balanced in ways that will mitigate this risk. For instance, rather than SIO being viewed as a trade-off between more accurate disclosure and quicker completion times, are there any solutions that can deliver both? Research suggests that Behavioural Economics (BE) may be our answer.

What is Behavioural Economics?

Behavioural Economics (BE) is where economics and psychology collide. It is a science that seeks to understand why and how individuals make decisions. BE differs from classical economic theory, in which the latter assumes that people are rational and individual economic decision-making is always about maximizing utility from a cost-benefit perspective.

For instance, the design of health-related questions in insurance application form largely conforms to the classical economic theory. Hence, issues such as under disclosure and non-disclosure were typically being viewed as deliberate ‘dishonest’ attempts in anti-selecting against insurers. However, this is not always the case as the underlying cause is beyond mere financial motives.

Leveraging on BE can help us to first understand why it is that people might not be entirely accurate or truthful and by knowing this, solutions can be designed to overcome these barriers.

Figure 1.0 : Possible reasons for lack of accuracy and honesty

The framing effect is a cognitive bias where people decide on options based on whether the options are presented with positive or negative connotations, e.g. as a loss or as a gain. This effect is well described by Kahneman and Tversky’s experiment, where participants were asked about the following scenario:

Kahneman and Tversky presented the same scenario, with the options presented differently:

We don’t tell the truth 100% of the time. Dan Ariely, a leading expert in BE tells us that people will ‘only be dishonest to the point they can still feel good about themselves’. The same applies to the insurance applicant’s responses. One key explanation is that, whilst inaccuracies might be intentional, they may be driven by psychological motives rather than financial motives.

For instance, some applicants downplay adverse medical histories. While they may be aware that they have a condition the insurer is asking about, they see their history as irrelevant to the eligibility to the coverage and elect not to disclose it. Thoughts such as ‘It was a long time ago’ or ‘My doctor tells me I’m stable without any real issue’ etc. drive such behaviour. Many of us also have a desire not to admit difficult things, such as weight, alcohol consumption, chronic diseases, to oneself. 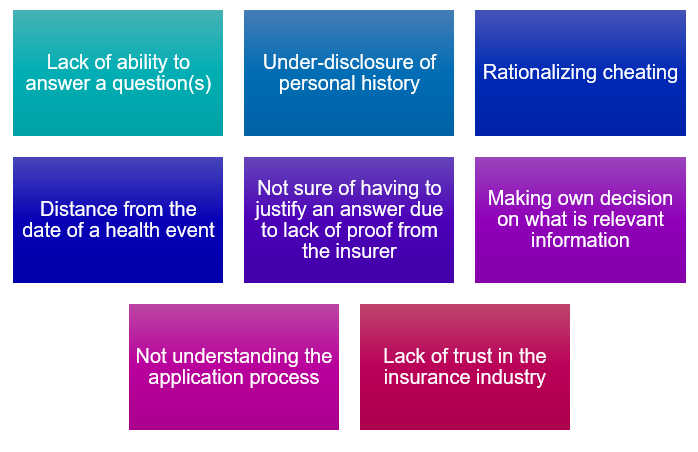 Figure 1.1 : Some examples of why there may be problems with applicant responses

Behavioural scientists believe that cognitive limitations affect most people’s ability to use and understand the information available to them. Kahneman indicates that people have two systems of thinking: 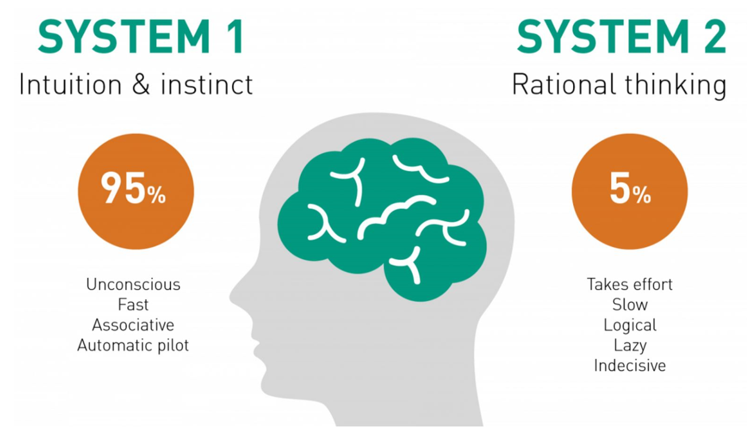 An example of System 1 thinking would be forming a perception of a stranger encountered in the street, merely based on how the individual walks or what the person wears. Even in situations where System 2 thinking would be more advantageous, people favour fast thinking because the intuitive processing system is automatic and cannot be shut down.

A better understanding of how people process information, and the mental ‘shortcuts’ they use, can help us explore ways to nudge them to certain desirable behaviour.

People often do not want to admit to their behaviours if there is shame or social stigma attached. They may rather shade the truth, or even be outright untruthful, than to cause themselves psychological pain. A classical example would be questions on tobacco usage.

A comparison was made between the percentage of Americans who enrolled in health insurance schemes under the Affordable Care Act (also known as Obamacare) who disclosed smoking, and the percentage of state residents who claimed to be smokers (Figure 1.3). 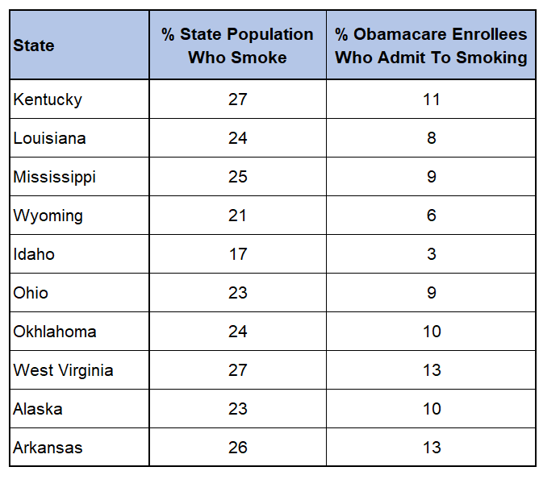 Figure 1.3 : Percentage of individuals who admit to smoking1

In most of the states where tobacco use was tracked, the percentage for those who were enrolled and who disclosed smoking was significantly below that of the state’s average. Although one explanation for the difference is the premium incentive, which may well be known to applicants. However, there is also an element of social stigma that comes with admitting one being a smoker.

Note that the tobacco question from a typical insurance application form is binary in nature, i.e. ‘Yes’ and ‘No’. The ‘Yes’ answer to this broad question, ‘Have you ever used tobacco or nicotine products in any form in the past 24 months?’ is an admission that the applicant is a tobacco user. While it may seem subtle, but the social stigma attached to the label “tobacco user” is very powerful and the need to feel good about oneself may deter them from disclosing their habits truthfully.

How can Behavioural Economics help?

There are 3 key principles to increase the accuracy of applicant disclosure: Make it (i) easier to be accurate, (ii) easier to be truthful and (iii) harder to lie.

Make it easier to be accurate

The key in achieving this is to reduce the amount of mental processing or ‘cognitive load’. Applicant has the tendency to answer questions quickly and often ended up with mental shortcuts without giving full thought and time. It is very common for insurers to reduce the number of questions by combining multiple questions. Taking this question for instance,

Ways to minimize cognitive loads in the design of SIO questions include :

Make it easier to be truthful

People do not want to admit to their behaviours if there is shame or social stigma attached. Questions involving adverse history related to psychiatric, sexual, alcohol or substance abuse are particularly susceptible to this. These questions should be phrased in ways that can normalize and destigmatize the applicant answers, for example :

Assuming behaviour exists – ask, ‘When did you last…?’ and ‘How frequently do you use…?’ rather than asking ‘Have you ever…?’ and ‘Do you use…?’.
Minimizing the applicant’s feeling of being at the extremes of acceptable norms – provide multiple answer options that are weighted towards extremes of behaviour. For example, instead of providing a ‘Yes’, ‘No’ binary responses (which represents extremes of acceptable norms) for the tobacco usage question, provide responses as below :

Make it harder to lie

As mentioned earlier, most people tend to shade the truths, tell half-truths, or even outright lie, up to the level that maintains their self-image as reasonably honest individuals. This is possible when it is easy to do so and easy to self-justify having done so.

Ways to make it harder for the applicant to self-justify lying include:

While BE’s application is still new, it remains promising in improving risk classification even in products issued via SIO. BE principles clarify application form questions and insurance jargons, promotes ease of understanding for producers and applicants, and facilitates better risk classification by removing ambiguity with poor question design.

The points mentioned above highlight simple yet practical steps that insurers can take to improve disclosures and customers’ on-boarding journey. 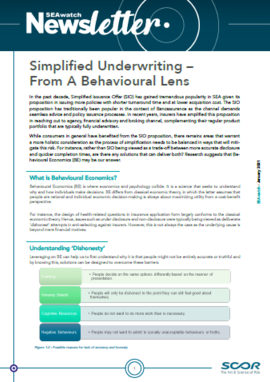