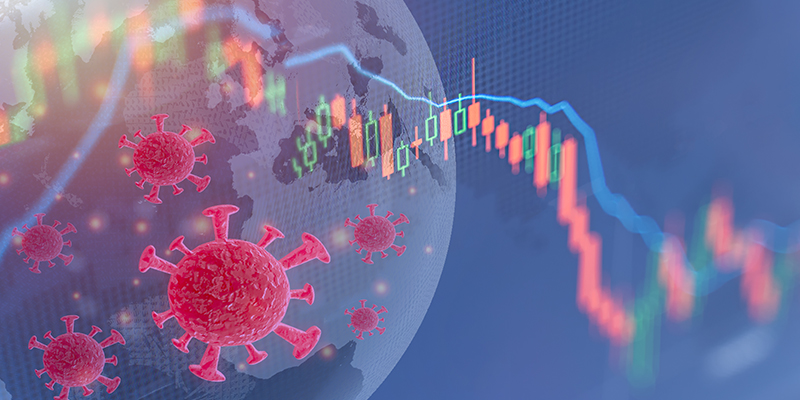 All economic developments involve a complex combination of factors such as strong trends, recurring cycles and near constants, accompanied by random movements that are ultimately quite marginal. All the key variables - consumption, savings, investment, productivity, interest rates, etc. – interact, but overall, we see relative stability, and therefore a certain predictability, in the economy as a whole. This is all the more true given that that the management of fluctuations through monetary and fiscal policies has improved considerably. The same applies to the understanding of medium- and long-term growth factors. As a result, forecasters often fight over decimal points.

But this vision of an economic system that follows an ultimately rather narrow evolutionary path proves deficient each time there is a major shock, which can take various forms: wars, terrorist acts, systemic banking crises, major natural catastrophes, and so on. Such shocks create “disruptions” that lead to imbalances in the way societies function and mark the history of civilizations.

The shock of the current pandemic is different from those the world has seen recently: the attack on the World Trade Center 2001, the financial crisis in 2008, the earthquake and the Fukushima nuclear disaster in 2011. It is much deeper, more serious, more long-lasting.

Pandemic shocks are known. They are rare, and they are severe. Low-frequency, high-intensity risks are by nature the most destabilizing. In the mapping of all risks, pandemics are the most threatening. According to mathematical modeling, a major global pandemic, with a probability of occurrence of once every 200 years, could cause more than 10 million deaths worldwide. For even lower probabilities - in the "tail end of the distribution", to use the probabilistic jargon - the toll could be infinitely more severe. We are obviously not at that point in the current situation: the macabre accounting shows that, for the moment, the number of victims is fortunately only a fraction of those 10 million deaths. Other deadly calamities are hitting global populations far harder. But the specificity of the current shock and its “resonance” are perhaps tied less to the number of its victims – deceased or sick – than to its nature.

Firstly, this shock is not circumscribed by space and time. Strictly speaking, it is global: unlike many other shocks, it has no one specific geolocation. It unfolds over time, following vertiginous exponential curves. A pandemic is the very essence of a serial risk that unfolds like an avalanche: the global shock fragments and refragments into billions of microshocks. Secondly, this shock has no one identified “driver”. It presents a risk that is both collective and individualized – it is simultaneously exogenous and endogenous: the risk is external to the person it affects, but also depends on everyone’s behavior in terms of protection and precaution. Its transmission to others is partly random, but also depends on the behavior of each infected person and, obviously, on the effectiveness of the health care system and the public policies adopted.

Finally, the main characteristic of pandemic risk is its invisibility. Invisible risks are the most serious. They trigger the key concept of vulnerability. Everyone feels that they could be affected, that they could suffer, that they could die… but they are also afraid of contaminating others, and therefore of contributing to the spread of this mortal danger. We are infinitely more afraid of danger we cannot see than of danger we can identify. Anxiety in the face of what we cannot pin down – linked to vulnerability – is far more devastating than the fear we experience when confronted with an identified threat. Many other invisible risks have created the same kind of feeling of vulnerability: asbestos, AIDS, nuclear risk, and further back in history, the plague, cholera, leprosy and the Spanish flu.

This general, global sense of vulnerability is reflected in behavior that can be described as paralyzed, which is partly due to anxiety-inducing management by the public authorities – they have been caught by surprise by this shock, the scale and severity of which have been underestimated. All economic players are concerned, both demand and supply are profoundly impacted, transactions are drying up, projects are vanishing, stock markets are crashing, and so on. In response, major monetary and budgetary resources are being deployed, which will certainly cushion the shock, but will not prevent a change in the trajectory of the global economy.

People’s aversion to risk is going to increase significantly, with economic, social and political consequences. This pandemic shock shows, for example, that the value placed on the absence of suffering, and on life, has risen very substantially throughout the world. Physical integrity has made a historic leap in the scale of values.

The age of vulnerability will put risk management at the center of all responsibilities. Humanity, at last, seems to care… about itself. May it find the means to help itself!