By engaging with policyholders to influence and enable positive change, insurers stand to gain twice, from improvements in mortality risk and from stronger customer relationships. Furthermore, responses to the survey suggest that, in pursuing this objective, insurers may well be preaching to the converted.

Most of us are at least average

When it comes to an assessment of their own general health, respondents demonstrate a consistent positive bias, across all countries, with 89.6% of respondents claiming to be in average or better than average health, leaving just 10.4% prepared to admit to being less healthy than the average (Fig 9).

Whilst one might expect a more even division between those perceiving themselves to be healthier than average and those considering themselves to be in less than average health, this response is remarkably consistent with findings in previous years. This apparent departure from reality is not entirely surprising. It is likely to be a reflection of the fact that most asymptomatic individuals have no objective measure with which to compare themselves to others. Furthermore, if respondents are free from any specific health problems, they may regard themselves as being in normal or average health, even though they are overweight, smoke or take too little exercise – characteristics that might lead a clinician to say otherwise.

Despite these very positive perceptions, there is a significant level of recognition amongst respondents that there are aspects of their lifestyle that can be improved. A mere 5% felt that they had no need of any improvement (Fig 10).

Working out the exercise statistics

The most commonly cited area in need of improvement is exercise. A comparison with the World Health  Organisation’s recommendation of 150 minutes of physical activity a week confirms that only a minority of respondents are getting enough exercise (Fig 11).

In an exception that proves the rule, the Japanese – noted for their longevity – appear to be among the least active. At the other end of the spectrum, respondents from India are the most likely to embrace the merits of exercise.

Rooting out the causes of stress

Reducing levels of stress is cited as an objective by 23% of respondents (Fig 10). Stress is a highly subjective issue – but whatever the cause, with 39% of respondents claiming to feel stressed or very stressed, stress management is a key contributor to a healthier lifestyle (Fig 13).

Of the causes of stress cited in the survey, the proportion of respondents who feel stressed or very stressed is markedly higher in China (55%), South Korea (54%) and Japan (51%) than in relaxed Indonesia, where just 17% consider themselves to be stressed.

Understanding what causes stress is the first step to resolving the problem (Fig 14). Money is the largest cause of stress, cited by 47% of respondents. It is especially stressful for those aged 23-38 (Millennials), the figure rising to 53%. Past that stage, money becomes less of a headache, with only 25% of the over 65s reporting it as a cause of stress.

Work is also regarded as a significant cause of stress, with 42% of respondents flagging up workplace tension. This peaks at around 52% of Millennial respondents, a testing time, when the demands of career progression and extraordinary financial pressures – such as starting a family or buying property – combine to underline the importance of income security and the work that provides it. 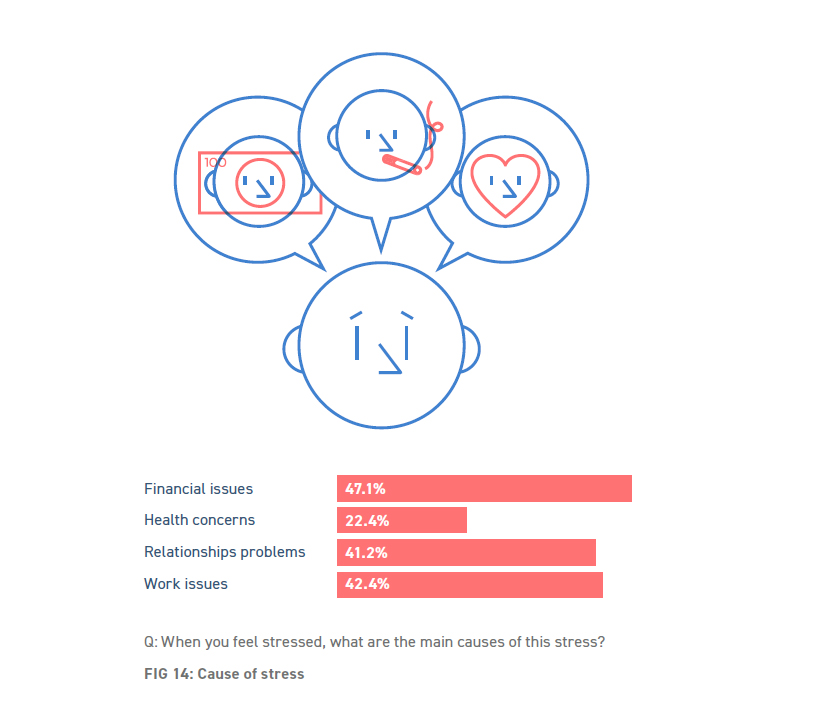 Dreaming of a good night’s sleep

From Leonardo da Vinci to Thomas Edison, there are numerous examples of people who excelled on very little sleep. But US non-profit organisation, the National Sleep Foundation, recommends that adults get between seven and nine hours sleep a night.

Around 60% report getting the recommended hours of sleep (Fig 15). However this appears at odds with recent global research on sleep deprivation in modern society. Further analysis would be required to fully understand the extent of the consumers’ self-perception bias on sleeping hours. 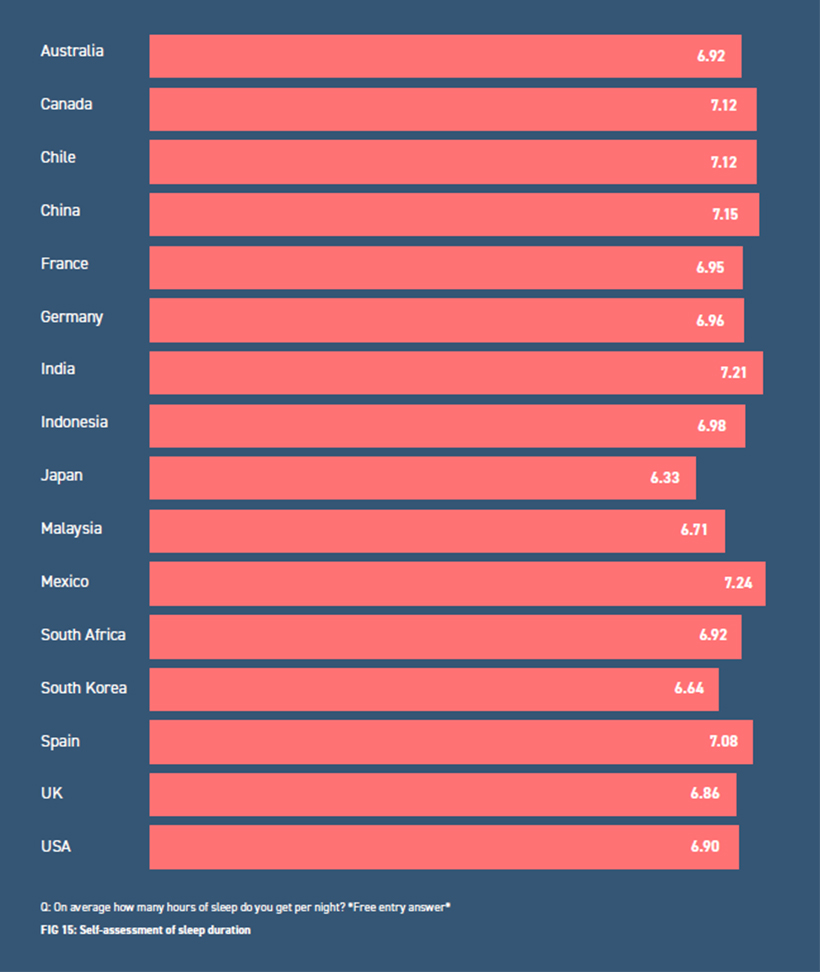 You are what you eat

The survey indicates that a majority of respondents understand the link between diet and health. Just 10% claimed that they rarely give thought to their diet – and only 3% showed no interest at all (Fig 16).

A symbiotic relationship with insurers

The fact that so many respondents understand the benefit of a healthy lifestyle and acknowledge the scope for improvement offers the promise of a symbiotic relationship with insurers. Recognising the merits of lifestyle improvement is one thing. Sustaining the motivation to make the necessary behavioural changes is quite another.

New technologies, particularly advances in fitness tracking devices, provide the means for a mutually beneficial cooperation between life insurers and their customers. If customers can be persuaded to share their data, insurers can provide the guidance and motivation to achieve sustainable improvements. Armed with the data, insurers can calibrate rewards for achievement and provide feedback and support that will serve to strengthen customer relationships. At the same time, insurers stand to reap the rewards of improved mortality risk.

Ownership of these devices varies widely from one country to another. The highest penetration, by a comfortable margin, is in India, where 57% of respondents possess a wearable device. At the other end of the spectrum are the Japanese, of whom just 10% reported owning a device (Fig 17). It seems ironic that a country with a reputation for technological innovation should be so far adrift from the trend, but it is consistent with their apparent lack of interest in exercise. The overall percentage of respondents in the 23-38 (Millennials) age band who own a device, a key target segment for insurance, is 40%.

Insurers aiming to promote the use of wearable devices will find themselves preaching to the converted. The responses to the survey demonstrate that a sizeable majority of respondents believe that using a device will contribute to improvements in their lifestyle (Fig 18). 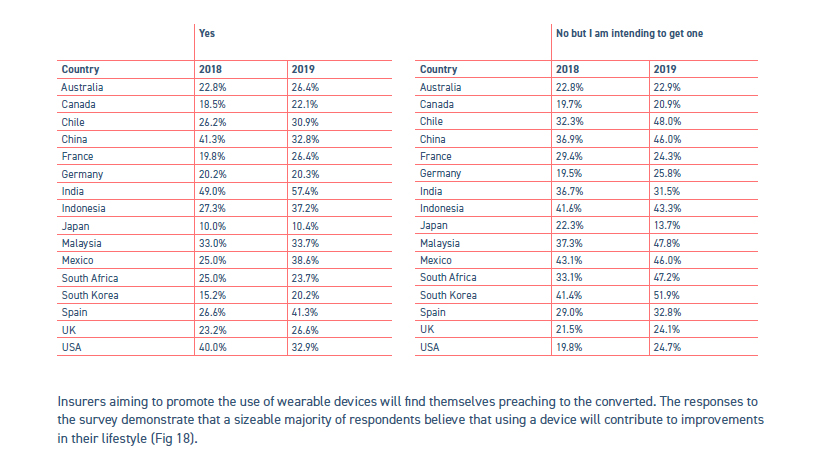 Streaming data enables insurers to assess risk on a continuous basis. This delivers deeper insights into the individual’s lifestyle, paving the way for insurers to reward improvements. Rewards are undoubtedly an essential motivation, not only to encourage consumers to adopt and maintain healthy behaviours but also to encourage them to engage with insurers. These inducements could range from premium discounts to smart watches or targeted retail discounts.

When asked which of a range of rewards they would find most appealing in exchange for undertaking physical activity, the most popular answer was discounts on insurance premiums (Fig 19), with 74% seeing this as being attractive or very attractive. 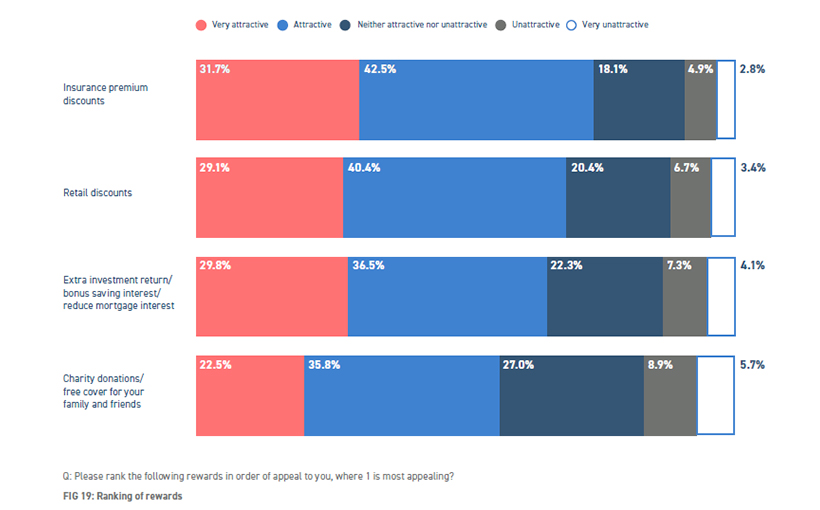 A key question for insurers is whether customers can be persuaded of the benefits of sharing their data. The appeal of premium discounts is by no means universal – suggesting that current inducements to share data from wearable devices are lukewarm at best.

There appears to be limited enthusiasm in most of the established markets for handing over this data. The exception is South Korea, where 60% of respondents are happy to share their data (Fig 20).

Familiarity may be a significant factor in shaping attitudes. Seeing the benefits of improvements to their health could lead consumers to feel more comfortable with the prospect of sharing data. Lack of familiarity may contribute to the greater reluctance amongst the over 55s, 34% of whom said that they would be unwilling to share their data.

However, a further influence upon the caution of older respondents could be concerns about how their data might be used and doubts that their activity data would provide sufficient evidence to secure a discount.

Doubts aside, in India, where the proposition had the support of 70% of respondents, and in Mexico where 62% of respondents gave a positive response, the idea of sharing data for premium discounts is embraced enthusiastically (Fig 20). 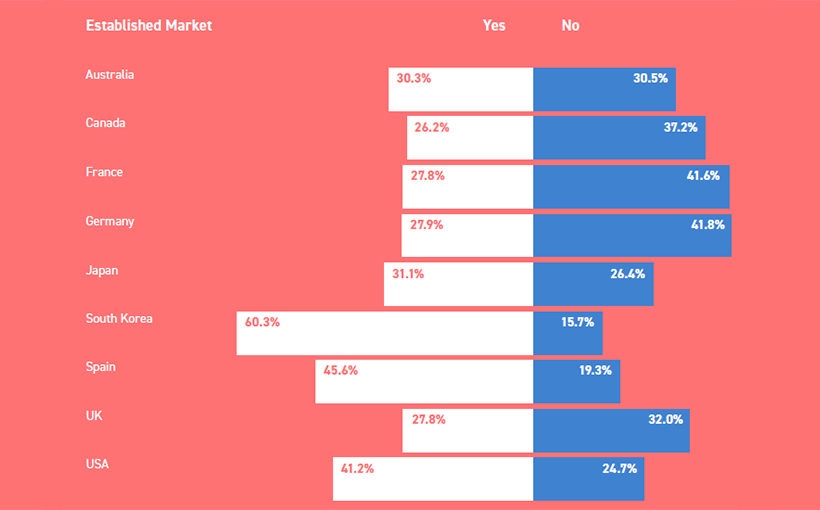 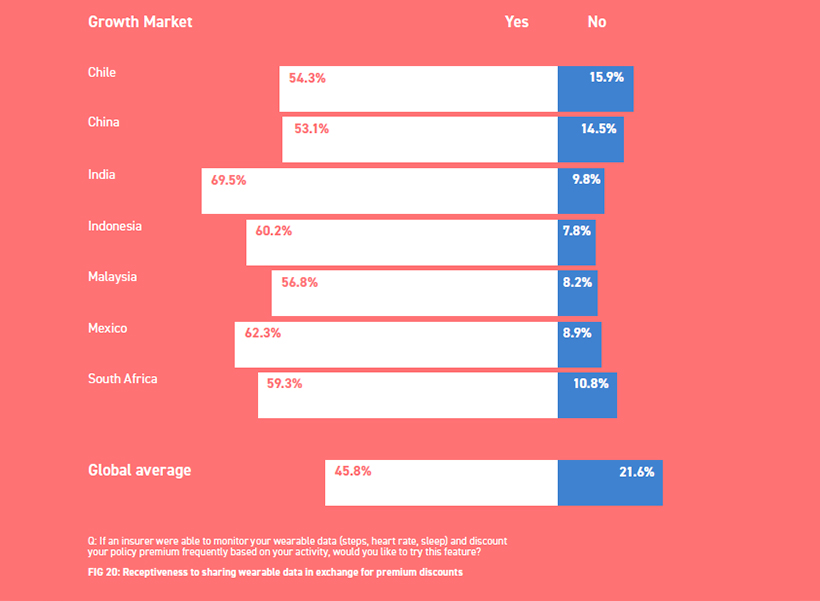 This article is part of the latest ReMark’s study of consumer behavioural trends in the insurance industry live in October 2019. 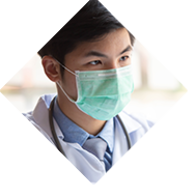 The Long-Term Health Risks for Post-COVID-19 Patients & the Implications for Reinsurance Underwriting.

Those who have recovered from the COVID-19 virus remain vulnerable to long-term after-effects which increase morbidity and heighten mortality risk.

Breast cancer survivors face new challenges when the disease is behind them: getting back to ‘normal life’

A recent SCOR publication issued from our team in South East Asia (SEA) raised an important question concerning the relevance of our current CI standard practices.