SCOR publishes a net income of EUR 512 million along with a 15% increase in shareholders’ equity, and proposes a dividend of EUR 1.40, up 8%

SCOR publishes a net income of EUR 512 million along with a 15% increase in shareholders’ equity, and proposes a dividend of EUR 1.40, up 8%
Over the course of 2014, the Group has continuously and consistently delivered high quality results, improving its competitive position. Thanks to a well-diversified global franchise, a strong worldwide presence and a solid financial performance, SCOR once again delivers a strong level of profitability and achieves a solvency level in line with its strategic objectives in 2014. 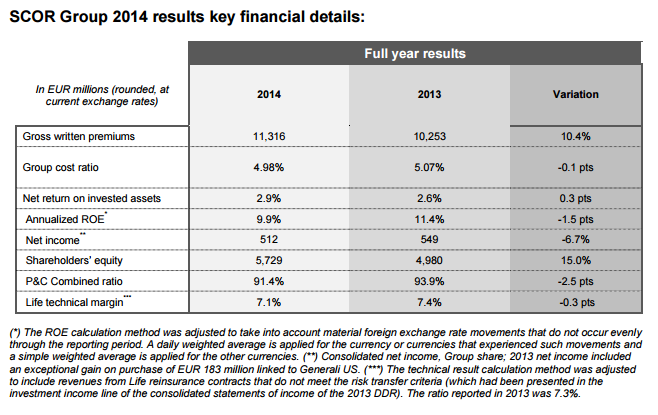 Denis Kessler, Chairman & CEO of SCOR, comments: “The Group delivers high quality results in 2014. It has continued to grow and expand its franchise. The technical profitability of SCOR Global P&C – which delivers a combined ratio of 91.4 % –, and that of SCOR Global Life – which records a technical margin of 7.1 % -, are highly satisfactory. Despite the weakness of interest rates, SCOR Global Investments records a return on assets of 2.9 %. SCOR once again delivers solid profitability, and achieves a solvency level in line with its strategic targets. Having invested in new underwriting and risk modelling tools, the SCOR group has prepared for the new prudential regime, Solvency II, which will come into force on 1 January 2016. It is confident in its ability to meet the challenges of a difficult financial environment, a heightened competitive situation and a demanding new prudential regime.”

1 On a published basis; on a pro-forma basis gross written premium growth is 3.8% (4.2% at constant exchange rates).