AM BEST raises the SCOR Group rating to « A-, stable outlook »

Body
SCOR is pleased with the decision by AM BEST to raise the rating of the Group and its subsidiaries from « B++, positive outlook» to « A-, stable outlook ». The rating of Revios, which had been placed under review with negative implications upon the announcement following its combination with SCOR, has been affirmed « A-, stable outlook ».
The return of SCOR to an « A » level rating, announced by AM Best as « excellent », completes the Moving Forward plan and confirms the solidity of its financial base and its high degree of solvency.
This improvement in the SCOR Group rating to « A-, stable outlook» by AM Best will notably spur the US underwriting of SCOR Global Life, the Life reinsurance subsidiary of SCOR which will result from the combination of SCOR Vie and Revios.
This upgrading will favour the implementation of the rigorous and focused underwriting plan which SCOR Global P&C intends to follow in Property and Casualty reinsurance in the United States. The objective of SCOR Global P&C in the United States is to grow its business with the same approach as that used in the other markets where the Group operates. Within the framework of the strict underwriting criteria put in place since 2003, SCOR Global P&C aims to regain treaty shares in market segments which the Group knows well. SCOR will not write those lines of business which the Group discontinued underwriting in 2002.
In the rest of the Americas (i.e. Canada and Latin America), the upgrading of the SCOR Group’s rating to « A-, stable outlook» by AM Best will be beneficial to the pursuit of growth in the Group’s business. In particular, SCOR is strengthening its underwriting teams in the Latin American and the Caribbean zones, capitalizing on its longstanding and extensive presence in these markets. Based in Miami, Messrs. J. Grieve, H. Barbanell, L. de Segonzac and R. Blanco, previously with another global reinsurer, are joining the SCOR underwriters operating currently in the markets of the Caribbean and Latin America.
In order to promote the re-energizing of its business in the Americas, SCOR will modify the structure of its American Non-Life business. This modification is twofold : (i) SCOR RE is acquiring General Security Indemnity Company of Arizona (“GSINDA”), an on-going US surplus line operation, from General Security National Insurance Company (“GSNIC”); (ii) SCOR is acquiring GSNIC, an entity entirely dedicated to run-off, from SCOR RE. In the context of this reorganization, SCOR is contributing USD 80 million to SCOR RE. These transactions are subject to the necessary regulatory approvals.
Conditions are now met for the SCOR Group to benefit from the opportunities offered by the US Life and Non Life reinsurance markets.
Titre du bloc
Read the PDF 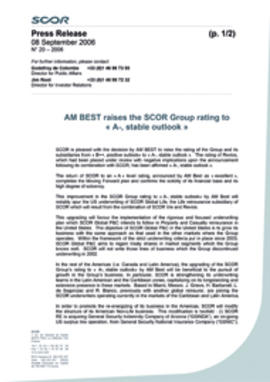