The first quarter 2011 was marked by a series of exceptionally serious natural catastrophes, with cyclones and floods in Australia, another earthquake in New Zealand in February, and the historic catastrophe in Japan on 11 March 2011.

Body
The first quarter 2011 was marked by a series of exceptionally serious natural catastrophes, with cyclones and floods in Australia, another earthquake in New Zealand in February, and the historic catastrophe in Japan on 11 March 2011.
SCOR’s strategy, which is notably based on a controlled risk appetite, balanced development between Life and Non-Life reinsurance, significant geographic and business diversification, highly efficient capital protection and a prudent asset management policy, has once again enabled the Group to demonstrate its ability to absorb major shocks.
During the first quarter 2011, SCOR has continued to execute its strategic plan “Strong Momentum”, obtaining a performance that largely compensates for the exceptional accumulation of natural catastrophes over the period:
The implementation of the strategic plan “Strong Momentum” has also been cemented by major achievements since the beginning of the year, notably the start of underwriting by the new Lloyd’s syndicate Channel 2015, which is entirely financed by SCOR, the issuance of CHF 400 million of perpetual subordinated notes, increasing the Group’s financial leverage to 16%, which is still well below the average level for the industry as a whole, the Group’s reinforced organisational structure in Latin America and the opening of a new SCOR Global Life office in Mexico.
As part of its strategic orientation designed to focus the Group’s Life reinsurance business exclusively on biometric risks, on 16 February 2011 SCOR announced the sale of its fixed annuity subsidiary in the United States, Investors Insurance Corporation (IIC). The acquisition of Transamerica Re’s mortality business, announced on 26 April 2011, reinforces the focus on biometric risks and gives the Group a new dimension, increasing the volume of its Life reinsurance business by around 50%. Moreover this transaction meets all the profitability and solvency objectives of the “Strong Momentum” plan. It should begin to be accretive in 2011 and is being financed without the issue of new shares.
Denis Kessler, Chairman and Chief Executive Officer of SCOR, commented: “The unprecedented accumulation of exceptional natural catastrophes in the first quarter 2011 has had a significant impact on the entire reinsurance industry. In this context, the resilience of SCOR’s performance bears witness to the relevance of our strategy, which is based on significant geographical and business diversification, a moderate risk appetite, a highly efficient capital shield and a prudent asset management policy. SCOR has been very active in the implementation of its “Strong Momentum” plan since the beginning of the year. The acquisition of Transamerica Re’s mortality business is a major transaction that strengthens the Group’s strategic orientations, meets its targets in terms of profitability and solvency and reinforces its position among the world’s leading reinsurers”.
Titre du bloc
Read the PDF 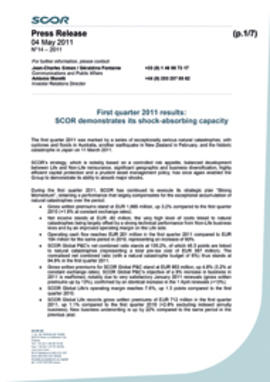