SCOR today announces changes to its Group Executive Committee that reflect the importance of transformation and sustainability in the next phase of its strategic development. All internal promotions, these changes highlight the Group’s deep talent bench.

SCOR today announces changes to its Group Executive Committee that reflect the importance of transformation and sustainability in the next phase of its strategic development. All internal promotions, these changes highlight the Group’s deep talent bench.

The new composition, proposed by Laurent Rousseau, Chief Executive Office of SCOR, was supported by the Nominations Committee of the Board of Directors and approved by the entirety of the Board.

The following Group Executive Committee members continue to serve in their current capacity:

Laurent Rousseau, Chief Executive Officer of SCOR, comments: “The breadth of global experience, the diverse backgrounds, the strong expertise, the knowledge of the industry and the leadership qualities of the members of this renewed Group Executive Committee give me a high degree of confidence in our ability to successfully pursue SCOR’s development. These internal promotions bear witness to the depth of SCOR’s talent pool and the strong competencies of our rising leaders. I am confident that this new organization will ensure managerial continuity while reflecting the strategic importance of transformation and sustainability for the Group. We are mobilized to accelerate the company’s profound transformation provided for in the “Quantum Leap” strategic plan and accelerate long-term value creation for all our stakeholders. I have shaped this Group Executive Committee – both the members and the allocation of responsibilities – with a view to ensuring that we will work and act as one team to execute SCOR's strategy and, together with our more than 3,000 employees, write the next chapter of SCOR’s success story.”

Denis Kessler, Chairman of SCOR, comments: “I have every confidence in this Group Executive Committee’s ability to continue the long-term development of the Group for the benefit of all stakeholders. On behalf of the Board, as well as on my own personal behalf, I thank Paolo De Martin for his marked contribution to the Group’s development since he joined SCOR in 2007. After having successfully served as Group CFO, he has been instrumental in the expansion of the Group’s global franchise over the past seven years as CEO of SCOR Global Life. I wish Paolo every success for the next step in his career.”

Jean-Paul Conoscente, an American and French citizen, is a graduate of the University of California Berkeley (Master of Science in Structural Engineering) and the Ecole des Travaux Publics, Paris (Engineering Diploma in Civil Engineering). He started his career in earthquake engineering in California and then in CAT Modeling as the European head of the Modeling firm EQECAT. He subsequently held several senior positions with AON Benfield as a reinsurance broker in London and Paris, and then with AXA Re in Paris as the Global Head of Property. In 2008, he joined SCOR in New York as Chief Underwriting Officer for the Americas for SCOR Global P&C; he helped transform SCOR’s team and portfolio in the Americas before taking on the role of CEO of SCOR’s P&C U.S. Operations in 2016, then CEO of Reinsurance globally in 2018. In 2019, he was appointed CEO of SCOR Global P&C and member of the Group Executive Committee.

Ian Kelly, a British citizen, is a Fellow of the Association of Chartered Certified Accountants. Having begun his career with Prudential, he subsequently joined the London-based Life reinsurance department of the Gerling Group, which later became Revios UK, holding the role of Chief Accountant. Following the acquisition of Revios by SCOR, he was appointed Chief Financial Officer of the UK operations in 2007. In 2009, Ian was appointed Director of General Accounting and Group Reporting, with responsibility for the consolidation of financial reporting of the SCOR Group. Ian strengthened his strategic, regulatory and financial experience within SCOR with his appointment as Head of Group Financial Planning and Analysis in 2011. Maintaining responsibility for the financial planning of the Group, Ian was named Head of Investor Relations in 2016 before being appointed Group Chief Financial Officer and member of the Group Executive Committee in 2020.

Frieder Knüpling, a German citizen, has been a member of SCOR’s Group Executive Committee since 2010, serving first as Deputy CEO of SCOR Global Life, then as Deputy Group Chief Risk Officer and finally as Group Chief Risk Officer. Before this, he held various actuarial, risk and finance roles at SCOR, Revios and Gerling Global Re. He holds academic degrees in Mathematics and Physics, and a PhD in Economics. He is a fellow of the Deutsche Aktuarvereinigung (DAV).

Romain Launay, a French citizen, is a graduate of the École Polytechnique, of the École des Mines de Paris and of the Centre des Hautes Études de l’Assurance. Having occupied various positions at the French Ministry for Economy and Finance between 2004 and 2009, he became Advisor to the Prime Minister in 2009. He joined SCOR in February 2012 as Senior Advisor to the Chairman and Chief Executive Officer, before being appointed Group General Secretary in May 2014. In February 2016, Romain Launay was appointed Group Chief Operating Officer.

Claire Le Gall-Robinson, a French citizen, is a lawyer admitted to the Paris and New York Bars and a graduate of Harvard Law School (Master of Laws) and the Paris II- Panthéon Assas University (Corporate and Tax law, Major de promotion). She practiced for more than 17 years in leading U.S. law firms Sullivan & Cromwell LLP and Skadden, Arps, Slate, Meagher & Flom LLP. Prior to joining SCOR in 2016 as Group General Secretary, she was a partner of the UK law firm Gowling WLG. She has taught at the Sciences Po Law School since 2010. She has authored articles on various topics relating to corporate law and co-authored a book on commercial law published by Editions Dalloz. In March 2021, she was appointed to SCOR’s Group Executive Committee.

Brona Magee, an Irish citizen, holds a Bachelor of Actuarial and Financial Studies from University College Dublin. From 2006 to 2011 she worked for Transamerica International Reinsurance Ireland, which was acquired by SCOR in 2011. She was CFO for SCOR Global Life Reinsurance Ireland from 2011 to 2013. In 2013, she moved to the United States to take the position of Chief Financial Officer, Americas at SCOR Global Life and in 2015 was promoted to Deputy Chief Executive Officer, Americas. In February 2017, she returned to Dublin and became Chief Actuary for SCOR Global Life. She was appointed Head of Client Solutions and a member of SCOR Global Life’s Executive Leadership Team in November 2017. In September 2018 she was appointed Deputy CEO and Head of Global Markets for SCOR Global Life and became a member of the Group Executive Committee. Brona Magee is a Fellow of the Society of Actuaries in Ireland.

Fabian Uffer, a Swiss citizen, started his career in 2003 as a life actuary in the insurance industry at Allianz Suisse. Following this, he worked at a startup company named CelsiusPro and developed a weather derivative pricing engine. In 2009 Fabian Uffer joined SCOR in the P&C Risk Management department. He then transitioned to Group Financial Modelling and Risk Analysis, where he held various positions including Head of Risk Modelling. In 2021 he was appointed Chief Risk Officer. Fabian studied at the University of Waterloo and holds a Master's in mathematics from the ETH Zürich. He is a fully qualified actuary of the Swiss Association of Actuaries.

François de Varenne, a French citizen, is a graduate of the École Polytechnique and a civil engineer of the Ponts et Chaussées. He holds a PhD in finance and graduated as an actuary from the Institut de Science Financière et d’Assurances (ISFA). François de Varenne joined the Fédération Française des Sociétés d’Assurances (FFSA) in 1993 as Manager of Economic and Financial Affairs. In London, beginning in 1998, he served successively as Insurance Strategist with Lehman Brothers, Vice-President for asset management solutions, and structured transactions specialist in insurance and reinsurance companies at Merrill Lynch and then at Deutsche Bank. In 2003, he became Managing Partner of Gimar Finance & Cie. He joined the Group in 2005 as Director of Corporate Finance and Asset Management. In September 2007, he was named Group Chief Operating Officer. In October 2008, François de Varenne was appointed Chief Executive Officer of SCOR Global Investments. 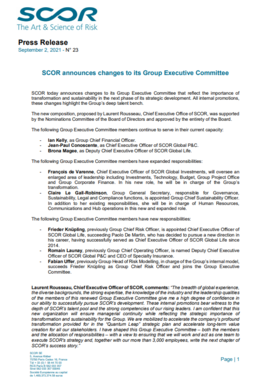