SCOR's results for the first nine months of 2013.

Body
In the first nine months of 2013, SCOR records strong results and good progress towards achieving the ambitious goals of its new strategic plan “Optimal Dynamics”.
As well as the notable financial performance, Q3 was marked by a series of major developments for the Group.
Most notably, SCOR finalised the acquisition of Generali U.S., which closed on 1 October. SCOR is nowthe market leader in the US life reinsurance market. Integration is proceeding smoothly and the new management team for the combined activities of Generali U.S. / SCOR is in place. This acquisition is fully in line with the Group’s strategic cornerstones and also meets the Group’s financial objectives. Badwill generated by the deal is likely to exceed EUR 150 million (an upward revision to SCOR’s original estimate of in excess of EUR 100 million), and will be disclosed with the Q4 results.
Also in the quarter, SCOR issued two capital market instruments which were met with strong demand.  A CHF 250 million perpetual subordinated debt was issued for the financing of the Generali U.S. acquisition2. The Group also launched an innovative mortality risk transfer contract (Atlas IX), which provides protection against pandemic risk3.
On 4 September 2013, SCOR published its new three-year strategic plan, called “Optimal Dynamics”, which aims to strengthen the Group’s position on the global reinsurance market4. This plan combines profitability, solvency, and a strong shareholder remuneration policy, through two main targets: (1) aROE of 1,000 basis points above the three-month risk-free rate over the cycle; (2) asolvency ratio in the 185-220% range (percentage of Solvency Capital Requirements or SCR, according to the Group Internal Model)5.
Denis Kessler, Chairman & Chief Executive Officer of SCOR, comments: “I am pleased with the strong results we have achieved year-to-date, particularly in light of the heavy burden of nat cat losses. These results are a promising first step of our new “Optimal Dynamics” plan. Moreover, the successful acquisition of Generali U.S. and the launch of its integration further strengthen our presence in the important US life reinsurance market.”

5 This is the ratio of available capital over SCR (Solvency Capital Requirements). 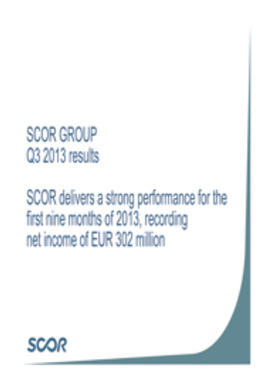