Body
In September 2016 SCOR started to test Blockchain technology, which is essentially a secured distributed database (ledger) shared by all parties to an exchange, and launched a Technical Accounting Blockchain Proof of Concept (PoC) to assess the feasibility of using Blockchain technology to enhance the Ruschlikon1 initiative. The test is described in this video.
SCOR is very pleased with the results of these tests, which demonstrate that Blockchain technology (i) is agile and quick to implement, (ii) simplifies and accelerates interaction, with real-time status simultaneously shared by the business partners involved, and (iii) has the potential to efficiently reduce costs.
To further explore the potential use of distributed ledger technology for the insurance industry, SCOR has joined the Blockchain Insurance Industry Initiative B3i. Since its launch in October 2016, the initiative has gained broad attention across the industry and beyond, while achieving a truly global scope with additional members joining from Asia, Europe and the Americas. The current 15 members of B3i are Achmea, Aegon, Ageas, Allianz, Generali, Hannover Re, Liberty Mutual, Munich Re, RGA, SCOR, Sompo Japan Nipponkoa Insurance, Swiss Re, Tokio Marine Holdings, XL Catlin and Zurich Insurance Group.
In a collaborative effort, members of the B3i initiative will explore the ability of distributed ledger technologies to increase efficiencies in the exchange of data between reinsurance and insurance companies. In order to realize a proof-of-concept, the participating members will implement a pilot project aimed at transacting reinsurance contracts with each other. If Blockchain technology proves to be a viable tool, it could transform the insurance industry through a shared, transparent record of contract-related information. Streamlining communication and transactions would subsequently improve industry processes and provide better insurance services to customers. The Blockchain Insurance Industry Initiative B3i intends share first results in June 2017.
Denis Kessler, Chairman & Chief Executive Officer of SCOR, comments: “SCOR’s role as a global Tier 1 reinsurer is to experiment and test cutting-edge technology like Blockchain. The success of the Proof of Concept conducted by SCOR on Blockchain, along with the work of the B3i members on this technology, will help to accelerate the digitalisation of the (re)insurance sector, to the benefit of the whole industry.”

1 Ruschlikon is a global community of insurers, brokers and reinsurers. Its primary purpose is to optimize administrative costs and enhance client services. Ruschlikon aims to further automate back office processes by implementing the ACORD standard messages for technical accounts, claims and financial accounts, along with the Ruschlikon Best Practice Processes. The Ruschlikon initiative brings together more than 50 companies, its Steering Group is composed of AIG, Aon Benfield, Guy Carpenter, Lloyd’s, Munich Re, SCOR, Swiss Re, Willis Towers Watson, XL Catlin. 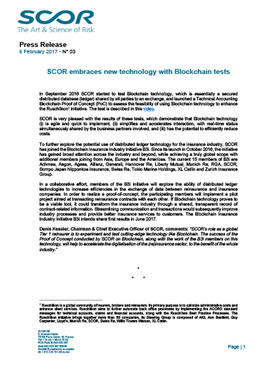 SCOR embrac ...
SCOR valide ...
Subscribe to alerts
Stay up to date with all the latest from SCOR