Christian Mounis, 52, a graduate of France’s ESSEC business school, joined SCOR in 1977 as a treaty underwriter. He opened the SCOR Tokyo office in 1983, before running SCOR’s Regional Operations in Asia from 1989 to 1995. Christian Mounis has been Deputy Chief Executive Officer of the Group’s Life business since 1998.
Jim Root has been appointed Director for Investor Relations for the SCOR Group.

Jim Root, 43, is a graduate of Princeton University and the Ecole Supérieure de Commerce de Lyon. He is also a Chartered Financial Analyst. He has previously worked as a financial analyst and portfolio manager, notably at Crédit Lyonnais and Templeton Asset Management. Jim Root formerly occupied the post of Director for Investor Relations at the SCOR Group between 2003 and 2005.
Stéphane Le May has been appointed Corporate Finance Manager within the Corporate Finance and Asset Management Department for the SCOR Group.

Stéphane Le May, 32, holds a DESS in Corporate Finance from the University of Paris-Dauphine, as well as a DESCF. Formerly a financial analyst with Oddo, Stéphane Le May joined the SCOR Group in 2003 as Investor Relations Manager.
Bertrand Bougon has been appointed Group Management Controller within the PBR (Planning, Budgeting & Results) Department for the SCOR Group.

Thierry Bovery, 45, a graduate of the Ecole Supérieure des Travaux Publics, also holds a DESS in Business Administration from the Paris I.A.E. Institute and a DESCF. From 1987 to 1996 he worked at the KPMG Audit Group, where he was Audit Manager, before joining SCOR where he worked as a Results, Methods & Procedures Analyst for Non-Life activities from 1996 to 2005. Since June 2005 he has been Management Analysis Director at SCOR Vie.
Titre du bloc
Read the PDF 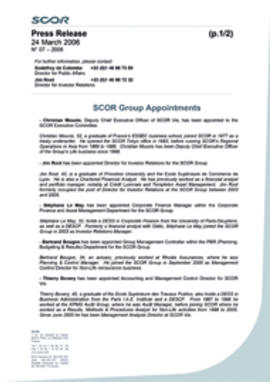 SCOR Group ...
Nominations ...
Subscribe to alerts
Stay up to date with all the latest from SCOR