Significant events in the financial year

Denis Kessler, Chairman and Chief Executive Officer, said:
“Despite an environment marked by historic natural catastrophes, SCOR has seen its profitability level increase significantly.  Net income at EUR 131 million is up 75%, and net income per share has increased by 59%.  A dividend of 5 Euro centimes per share will be proposed at the General Meeting.
These results confirm the pertinence of the strategic choices made three years ago, notably the decision to follow a prudent and diverse underwriting policy centred on the markets and lines of business which the Group knows well.  2005 demonstrated the balance achieved between Life and Non-Life reinsurance, as well as the reorientation of our business towards Europe and Asia.
The SCOR group is progressively achieving the objectives it set as part of the Moving Forward Plan, and is proving that its equity capital is fully commensurate with its underwritings, as its reserves are to its commitments.  It is demonstrating its capacity to create value in a context of heightened competitiveness and increased loss occurrence."
Titre du bloc
Read the PDF 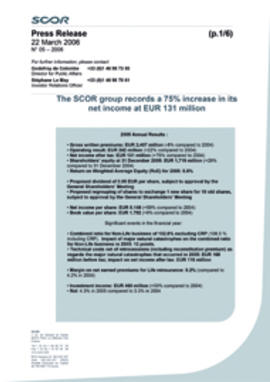 2005 Annual ...
Résultats a ...
Subscribe to alerts
Stay up to date with all the latest from SCOR