SCOR holds its course: combining growth, profitability and solvency to record a net result of EUR 330 million in 2011

Body
In a year marked by exceptional nat cat losses and financial turmoil, SCOR’s strong enterprise risk management and robust capital shield policy have proven their effectiveness, allowing the Group to deliver a net income of EUR 330 million in 2011. Pro-forma, net income reaches EUR 368 million. This performance is sustained by an operating cash flow of EUR 530 million in 2011. A dividend of EUR 1.10 per share, as for the previous year, will be proposed to the Shareholders’ Annual General Meeting on 03 May 2012.
The Group was able to seize growth opportunities, both internally driven, due to SCOR’s strong franchise and high level of expertise, and through the acquisition of Transamerica Re. SCOR records gross written premiums up 13.6% to EUR 7.6 billion in 2011 (+16.5% at constant exchange rates). Pro-forma, gross written premiums reach EUR 8.6 billion (+28.3%).
Throughout the year, the Group has continued to implement its strategic plan “Strong Momentum”, updated last September in “Strong Momentum V1.1”, notably to take the Group’s new perimeter into account. The Transamerica Re acquisition considerably reinforces SCOR Global Life’s market position, making it #2 in North American Life Reinsurance2 and, together with the disposal of the US annuity business, helps to strengthen the Group’s Life business focus on biometric risks. The SCOR Global P&C, SCOR Global Life and SCOR Global Investments initiatives detailed in the plan have been launched and two Non-Life initiatives have been successfully added, namely the Lloyd’s syndicate “Channel 2015”, active since the beginning of 2011, and the underwriting of “private deals”.
In this context, SCOR records an increase in shareholders’ equity to EUR 4,410 million at the end of 2011 (+1.3% compared to the end of 2010), after EUR 201 million of dividends distributed to shareholders in May 2011 for the year 2010. Following the issuance of CHF 650 million of perpetual debt that allowed SCOR to complete the Transamerica Re acquisition without issuing new shares, the Group’s financial leverage stands at 18.1% at the end of 2011, a level still below industry average.
Denis Kessler, Chairman & CEO of SCOR, declares: “The resilience of SCOR’s business model has once again been proven in 2011 by its capacity to combine profitability, growth and solvency in the context of an exceptional accumulation of natural catastrophes and financial market stresses. Catastrophes such as the Japan earthquake and the Thai floods have shown the efficiency of the robust capital shield policy that the Group has put into place, while our prudent asset allocation has protected us from most of the effects of the turmoil in the markets, and notably from the Eurozone sovereign debt crisis. Not only has the Group successfully faced these challenges but it has also been able to enhance its competitive edge with the major acquisition of Transamerica Re and the disposal of the U.S. annuity business, focusing our Life activity on biometric risks, and accelerating the implementation of our strategic plan “Strong Momentum V1.1” along with planned and new initiatives. The recent January 2012 renewals are further proof that SCOR’s strategy and business model successfully combine the ability to seize profitable opportunities within a strong enterprise risk management framework, leveraging on its key position in the reinsurance industry.”

1 Pro-forma: as if Transamerica Re’s mortality portfolio acquisition had taken place on 01 January 2011. Please refer for details to the presentation of Full-Year 2011 results available on www.scor.com and to pages 5 and 6 of this press release.
2 By recurring new business volume; source: 2010 Munich American SOA Survey.
3 Proposal submitted to the Shareholders’ Annual General Meeting on 03 May 2012 for approval.
Titre du bloc
Read the PDF 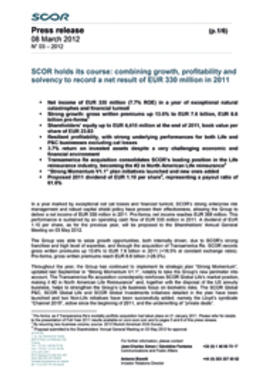