Basin effects in the 2017 Mexico earthquakes

Mexico is one of the world's most seismically active regions, sitting atop several intersecting tectonic plates. In September 2017, two earthquakes shook Mexico. 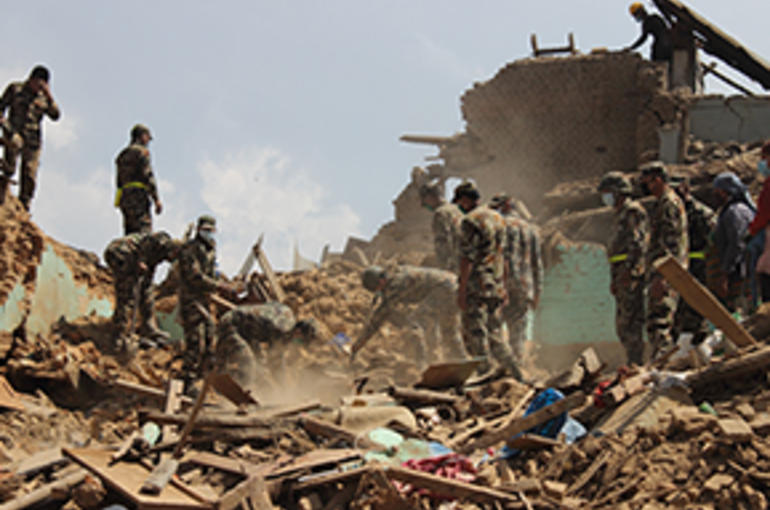 So far this year, Mexico has suffered two earthquakes with magnitude larger than MW7.0. In a quirk of history, the second of these earthquakes occurred on the exact same day of the year as a major earthquake that devastated the Mexico City in 1985. Although the occurrence of earthquakes in Mexico is not a surprise (there have been four MW7+ earthquakes in the past ten years), the damage due to these earthquakes was some of the highest the country has seen. 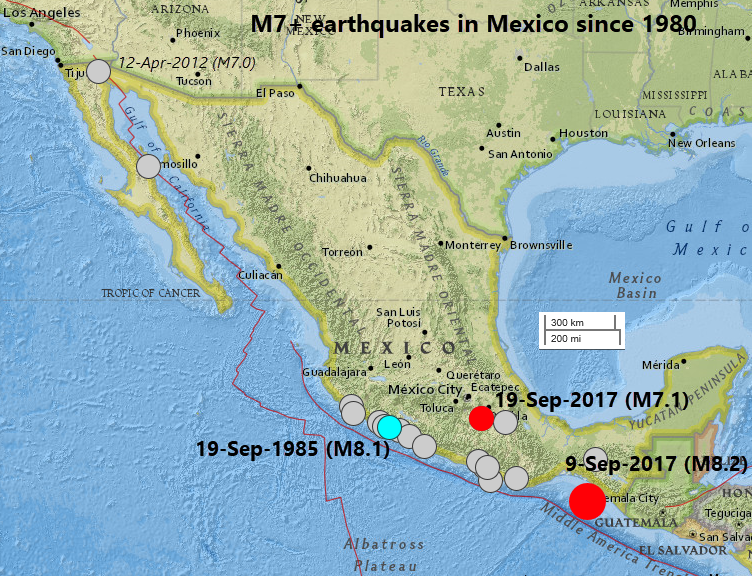 The earthquakes are a reminder to us of the specific risks faced by the population here, particularly in Mexico City. A large part of Mexico City sits upon the bed of Lake Texcoco, drained over time since the arrival of European settlers in 1520. While providing a beautiful flat building space and fertile soil, an unfortunate consequence of the lake sediments is that they amplify and extend the duration of shaking from earthquakes. It is common for seismologists to compare the city to a bowl of jelly, where the lake sediments are the jelly and the volcanic rocks beneath are like the bowl itself. This was dramatically demonstrated in 1985 when a distant earthquake 400 km away caused widespread damage and over 5,000 fatalities. Such levels of damage from an earthquake so far away are almost unheard of anywhere else. By comparison, shaking from the 2011 earthquake in Japan (M9.1, over 20 times more powerful) was barely felt beyond 400 km from the earthquake rupture. 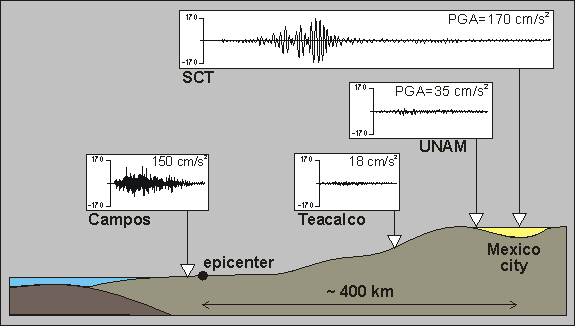 Seismic Seismic recordings of the 1985 earthquake in Mexico highlight how dramatically the basin effect amplified seismic energy from an earthquake 400 km away. Image:  Jean-François Semblat  / Wikimedia

The basin effect was seen in shaking from the 9th September MW8.2 earthquake of this year – likely the most powerful to affect Mexico over the last 100 years. Buildings were evacuated over 500 km away because of shaking from that event. Nevertheless, damage from the MW 8.2 earthquake was minor in Mexico City, especially compared to widespread damage in the coastal towns and cities of Chiapas and Oaxaca. The second MW 7.1 event, smaller but closer to Mexico City, had a much more significant impact on the capital.  Over 40 building collapses have been reported and hundreds more buildings suffered damage. Crowd sourced maps of damage highlight the location where damage occurred, especially concentrated above the former lake bed where similar damage had occurred 32 years earlier. 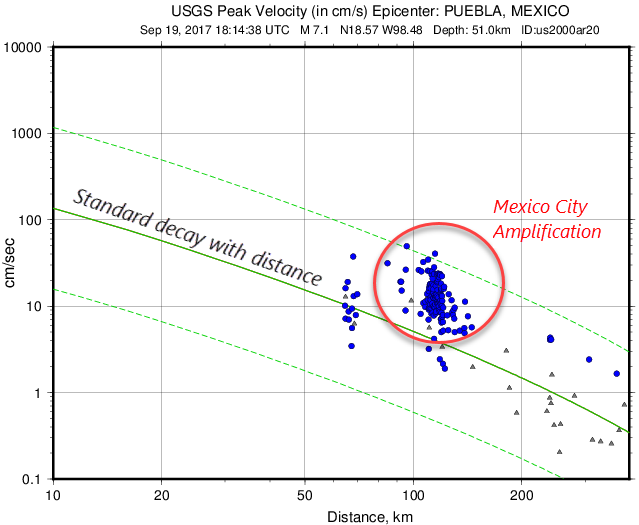 Level of seismic shaking as a function of distance from the 19-Sep-2017 Puebla earthquake. The solid green line shows the best fitting model and dashed lines show two standard deviations around this. Blue dots show observations of shaking that are higher than expected due to the basin amplification. Source: USGS ShakeMap. 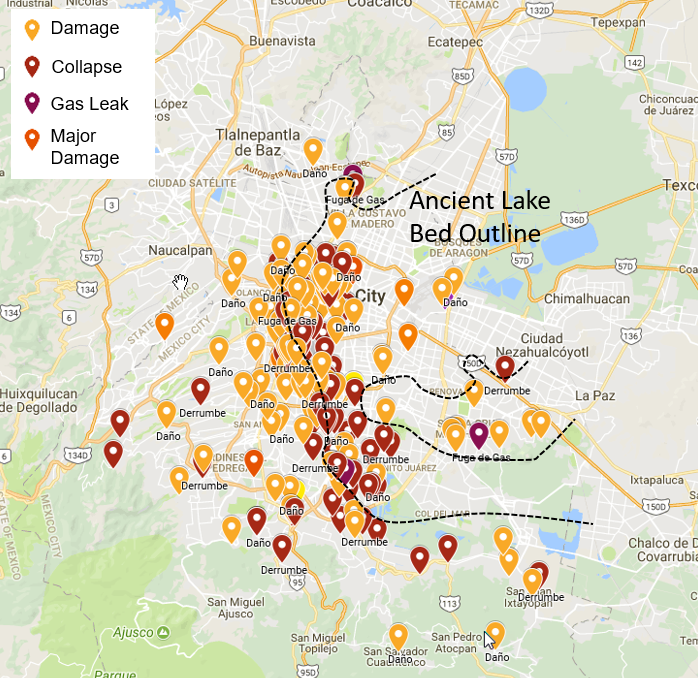 Crowd-sourced damage map annotated with the outline of the ancient lake bed.

As a response to the 1985 earthquake, Mexico City introduced some of the most stringent building codes in the world. These codes were created specifically with the basin effect in mind, and have subsequently been enhanced several times.  Many of the collapsed buildings were older than those codes (91% pre-1985), suggesting that the codes were generally effective for post-1985 construction. However, some of the collapsed buildings had survived the 1985 earthquake and had been retrofitted to comply. This leads to questions about the enforcement of codes when retrofitting older buildings.

There is also a question of whether codes could have been stricter. For example, soft-storey construction, where the ground floor of a building is used for a parking garage or other open area, accounts for 57% of the collapses. This type of construction is considered in CAT models as a known seismic vulnerability, shown by experience in the 1989 Loma Prieta and 1994 Northridge earthquakes. Multi-storey buildings are especially sensitive to the basin effect because lower frequency shaking are amplified more, and this means the soft-storey vulnerability is even worse for Mexico City. We would expect more regulation of this construction in the design codes, and the collapses suggest this was not the case.

Various groups of engineers will survey the damage over the coming months, and dive deeper into the lessons that can be learned. A planned update of the codes has now been delayed until those investigations are complete.

The Mexico City basin soil effect is included in the earthquake vendor models that form the basis of SCOR's risk view. The depth of the sedimentary basin is fed into ground motion models, increasing the levels of damage predicted for risks built on the lake sediments compared to those built on harder volcanic rocks nearby. That means that we can differentiate the level of risk for different locations at a high resolution over the city. However, it is not widespread practice in the local market to store or retain detailed location data in reinsurance submissions. The biggest limitation of risk modelling can often be the exposure data available, rather than the underlying model used for calculations.

Another problem of modelling this effect is the extremely non-linear way that basins affect earthquake damage. The basin influences the amplitude, frequency, direction and duration of the shaking, all of which interact with the specific structures of different buildings in different ways. Current CAT models only capture the amplitude and some of the frequency effects. This means we can differentiate risks based on their location and building heights, but not much more. Narrowing down more specific structural design risks and specific earthquake hazards is a challenge for the future. Computational models in the academic research community are now able to predict earthquake shaking and basin effects at very high levels of detail (e.g. this video). Incorporating this kind of detailed modelling of shaking into stochastic earthquake loss models will be a major leap forward.

Sedimentary basins are unfortunately common places to build cities because they tend to form vast flat areas among otherwise mountainous regions. There are numerous examples where basin effects contribute to seismic risk around the world. While Mexico City usually sits at the top of the list, other notable examples are Los Angeles, Salt Lake City, Vancouver, Kathmandu, and Tokyo.