In the first half 2014, SCOR delivers a solid performance that continues to combine growth, profitability and solvency: 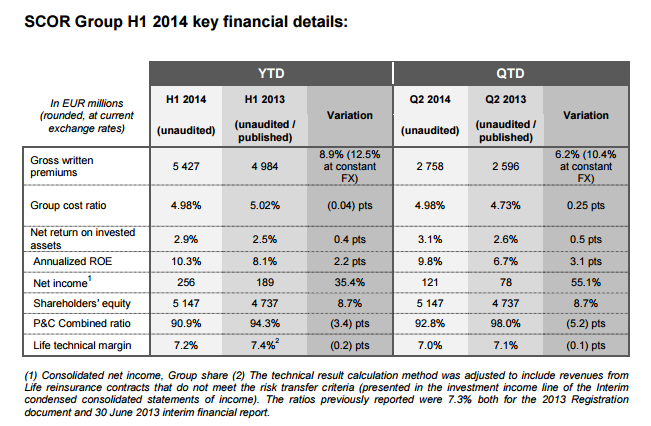 This first half 2014 has been rich in terms of business developments for the Group, including:
The quality and performance of SCOR’s business model and the effectiveness of its management have been recognized by industry professionals, who have presented the Group with a number of prestigious awards over the first half 2014. These include the “Prize for Best Financial Operation - M&A” from the Club des Trente for the Generali US acquisition, “Reinsurer of the Year” from the prestigious Reactions London Market Awards, and the Trading Risk "Life Transaction of the Year” Award for the Group’s “Atlas IX” extreme mortality risk transfer contract.
Denis Kessler, Chairman & Chief Executive Officer of SCOR, comments: “Year after year, SCOR strengthens its position and footprint as a Tier 1 reinsurer, developing and providing high quality products and services and helping its clients to manage their risks in a challenging financial and regulatory environment. Almost a year after its launch, the “Optimal Dynamics” plan is firmly on track in terms of strategic initiatives. Financial performance is also strong, with the two “Optimal Dynamics” targets of profitability and solvency being achieved.”

1 The technical result calculation method was adjusted to include revenues from Life reinsurance contracts that do not meet the risk transfer criteria (presented in the investment income line of the Interim condensed consolidated statements of income). The ratios previously reported were 7.3% both for the 2013 Registration document and 30 June 2013 interim financial report.

3 The 2014 solvency ratio is the available capital at year-end 2013 divided by the SCR as of that date, allowing for planned business in 2014. The 2013 Solvency Ratio of 221% included an estimate of the impact of the acquisition of Generali US in 2013.