Air pollution threatens human health and the health of our planet 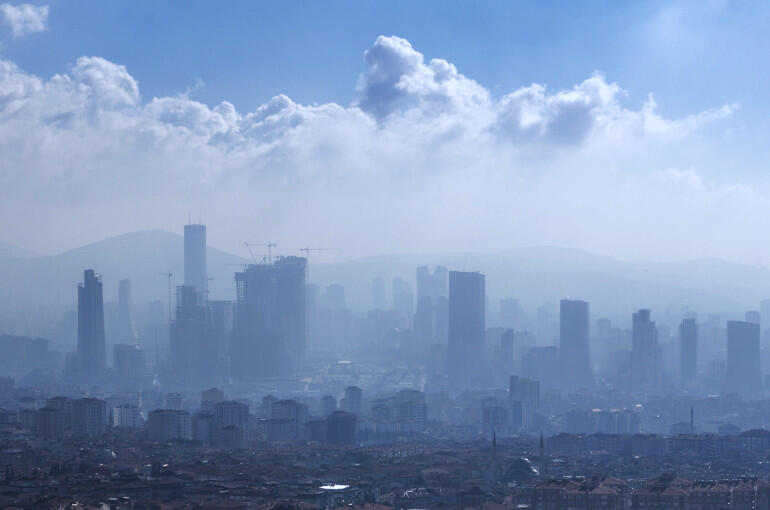 The health of our planet is closely linked with human health and society’s ability to thrive. The World Health Organization (WHO) considers air pollution to be the world’s most serious environmental health risk as 99% of people live in areas with more than the recommended amount of particulate matter (PM), harmful gases, and other pollutants in the air(1). In fact, the WHO now considers the burden of disease attributable to air pollution to be on par with other major global health risks such as unhealthy diets and smoking(2) . But it isn’t just people who are suffering from air pollution: our planet is feeling the ill effects too.

With our goal of improving people’s health and well-being and protecting societies, SCOR has a vested interest in understanding how exposure to air pollution can have a lasting impact on health and uncovering how trends are expected to evolve in the coming years. In 2018, SCOR released a report titled “Health impacts of air pollution” that analyzed the health effects of air pollution and predicted increasing air pollution trends through the year 2060. In this scenario, the consequences for years of life lost and quality of life would be significant.

Since this report was published, developing countries continue to see concerning increases in air pollution spurred on by growing economies and new reliance on fossil fuels. However, many developed countries have introduced new regulations that seem to be reversing trends.

Meanwhile, air pollution from transportation, industry and agriculture plays an ongoing role in perpetuating climate change, endangering the stability and growth of societies around the world.

There is mounting scientific evidence that exposure to air pollution leads to adverse health outcomes at much lower levels of air pollution than previously thought(3). PM is a particular concern because when the particulates are inhaled, they can become lodged in the lungs or absorbed into the bloodstream and transported through the body.

In 2016, the WHO attributed 24% of stroke, 25% of ischaemic heart disease (IHD), 28% of lung cancer and 43% of chronic obstructive pulmonary disease (COPD) cases to air pollution worldwide. The subject was revisited in a 2019 report that outlines how air pollution contributes to more than 5 million deaths annually by causing or exacerbating noncommunicable(4).

SCOR Life & Health Beijing Branch’s Chief Medical Officer Dr. Mark Li, co-author of SCOR’s 2018 report, explains that while long-term air pollution exposure isn’t directly responsible for these deaths, it is contributing to the severity of these chronic conditions that can cause death.

Other studies link air pollution to lower birth weights, asthma, and dementia(5). More recently it has been suggested that there is a correlation between exposure to air pollution and increased mortality from COVID-19(6).

Impacts of air pollution on the health of our planet

While concerns for human health largely revolve around elevated levels of PM, high concentrations of greenhouse gasses like carbon dioxide (CO2) and methane are a major contributing factor to global warming and the cascade of environmental consequences that come with it. As the main source of CO2 pollution is burning fossil fuels, the transportation industry has the potential to have a huge impact on reducing air pollution – as do those who insure the industry.

Emissions from transport account for one quarter of the EU’s total greenhouse gas emissions. While greenhouse gas emissions from many sectors declined across Europe between 2013 and 2019, the European Environment Agency found that emissions from the transportation sector increased steadily during this period, only slowing as the COVID-19 pandemic brought travel to a standstill(7). As people return to the office and international travel resumes, we can expect another increase in emissions in coming years.

Emission performance standards for new cars look to limit the impact of commuting on air pollution and set specific emission targets for each manufacturer. However, electric vehicles (EVs) remain a cleaner option, emitting 17-30% fewer greenhouse gases and air pollutants over their lifetime than petrol or diesel cars(8). New methods of extending electric vehicles’ battery life and battery recycling options promise to further decrease the emissions produced by EVs in the future.

Air pollution is both a local and global concern. Because air pollution is necessarily airborne, it should come as no surprise that pollutants are carried to geographical areas beyond the areas where they originated. One study found that as much as two-thirds of the PM found in the Netherlands originated outside the country(9).

Several studies have also demonstrated that air pollution negatively correlates with the level of income of countries: European countries, North America and Australia face lower levels of air pollution, while in the Eastern Mediterranean and in Southeastern Asia, urban air pollution averages can exceed WHO limits by five to ten times(10).

Developed countries have benefited from a decades-long head start when it comes to mitigating air pollution through governmental regulations. However, despite these localized improvements, air pollution continues to be a global threat to both human health and the climate. Moreover, economic growth in developing countries is now a particular source of concern as increasing demand for transportation and growing industrial activities are likely to drive a new wave of air pollution that will be felt around the world.

What role can insurers play?

For life & health insurers, the primary consequence of air pollution is increased mortality and morbidity. Claims and premiums already reflect the impact of pollution in areas where air quality has been steady in recent years.

Nonetheless, knowing that air pollution can impact health should not justify discriminatory underwriting or pricing for those living in areas with higher rates of air pollution. Instead, insurers should use this information to offer more relevant and tailor-made health and life insurance solutions to those who need it.
Additionally, insurers can play a key role in encouraging the insured to adopt behaviors that will both reduce air pollution and improve their health. For example, offering an incentive if an insured walks or cycles to work instead of driving can both contribute to reducing the air pollution and encourage a healthy lifestyle.

SCOR is committed to creating a world where we can all breathe easier. In addition to being a member of the Net-Zero Asset Owner Alliance, in 2021 we contributed to the creation of the Net-Zero Insurance Alliance. This groundbreaking collaboration among more than 20 of the world’s largest (re)insurance companies and the United Nations Environment Programme demonstrates our leadership within the global (re)insurance sector in the transition to net-zero greenhouse gas emissions.

The road to net-zero is long and will be challenging, but we need to start the journey now. In this context, we have committed to completely phase out coverage for coal-fired power plants with unabated emissions by 2030 in the OECD countries, and by 2040 for the rest of the world.
SCOR is working to ensure a healthier planet where people and societies can thrive.