SCOR’s shareholders, who met today, overwhelmingly support SCOR’s strategy and the new governance proposed by its Board of Directors

All resolutions were adopted

SCOR’s shareholders met today at a Combined (Ordinary and Extraordinary) General Meeting, chaired by Denis Kessler, Chairman and Chief Executive Officer, in order to vote on all the resolutions submitted to them.

There was strong support for the Group’s new governance proposed by its Board of Directors, consisting of a separation of the roles of Chairman of the Board and Chief Executive Officer with effect from today.

The details of the resolution voting results have been posted on the company’s website at: https://www.scor.com/en/shareholders-meetings.

Denis Kessler, Chairman & Chief Executive Officer of SCOR, comments: “This General Meeting took place for the second time in a virtual format, which nonetheless enabled us to maintain a high-quality dialogue with shareholders. The Board of Directors welcomes the shareholders’ support for all the resolutions. This vote by our shareholders bears witness to their confidence in the Group’s new governance in terms of successfully pursuing the company’s growth, focusing on the twofold objective of profitability and solvency. It validates the strategy followed for more than 18 years to raise this global reinsurance group to the highest level and to maintain its independence, which is a gauge of its success. Finally, I would like to thank all the Group’s employees, who have proved their ability to adapt throughout the current health crisis. SCOR is fully equipped and fully mobilized to use all the means at its disposal to continue to create value for its shareholders.” 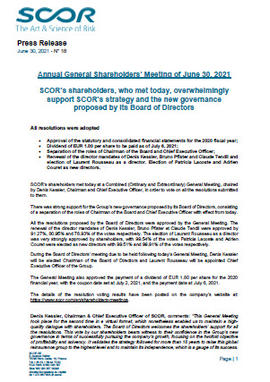