Body
SCOR delivers good financial results as well as strong core earnings from both Life and P&C for the first nine months of 2014, in line with its strategic plan assumptions. Based on its powerful cornerstones, the Group leverages its value proposition as a Tier 1 global reinsurer.
Image 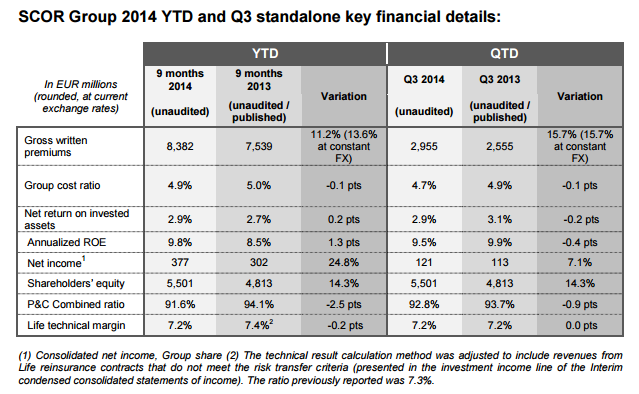 The Group’s annual Investors’ Day held in September confirmed that SCOR is firmly on track with the implementation of its “Optimal Dynamics” plan, which has been in place for just over a year. Despite the numerous headwinds faced by the industry, SCOR’s business model has demonstrated its robustness and enabled the Group to confirm its strategic targets focused on profitability and solvency, as well as its consistent dividend policy.
SCOR’s risk profile, strong solvency and high profitability have once again been recognised by Fitch, which raised the outlook on SCOR’s “A+” rating to positive on 20 August. A.M. Best and S&P have recently confirmed their ratings for SCOR, S&P having upgraded the Group’s “capital and earnings” score from “strong” to “very strong” and its “liquidity” score from “strong” to “exceptional”.
In line with its strategic target to optimize the financial structure of the Group, SCOR has successfully placed two perpetual subordinated debt issues of EUR 250 million and CHF 125 million2, with coupons set at 3.875% and 3.375% respectively, thereby demonstrating SCOR’s strong capital market access and financial flexibility.
According to its strategic assumptions, SCOR is expanding its business in emerging markets by developing a local presence and appropriate added-value solutions for its clients. In this regard SCOR launched a local entity in Brazil in September, with SCOR Brasil Re offering Life and P&C solutions to its Brazilian clients.
Denis Kessler, Chairman & Chief Executive Officer of SCOR, comments: “As stated at the Investors’ Day in September, SCOR’s business model fits with today’s competitive environment, enabling the Group to deliver a strong financial performance. SCOR’s leading position as a Tier 1 reinsurer has been recognised by both the industry and the rating agencies, which have acknowledged the pertinence of our strategy and the robustness of our financial profile. SCOR is now actively preparing its renewal campaign in January, whilst fully respecting its technical profitability target.”

1 The technical result calculation method was adjusted to include revenues from Life reinsurance contracts that do not meet the risk transfer criteria (presented in the investment income line of the Interim condensed consolidated statements of income). The ratio previously reported was 7.3%. 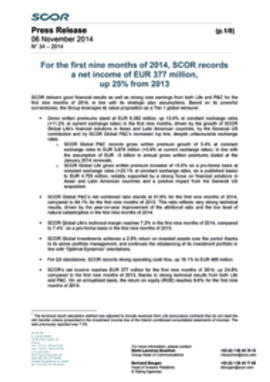