SCOR confirms its strong momentum in the third quarter with growth of 17% and net income up by 18% to EUR 111 million, thanks to its technical performance in Life and Non-Life reinsurance

Body
In the first nine months of the year, the Group has recorded:
Denis Kessler, Chairman and Chief Executive Officer of SCOR, comments: “SCOR has continued its sustained growth in the third quarter 2010, combining profitability and solvency. The Group has thus achieved excellent operating results over the past quarter, with a combined Non-Life reinsurance ratio of less than 95% and an operating margin of around 8% in Life reinsurance. These results show that SCOR is already fully mobilised to achieve the objectives set out in its new strategic plan, “Strong Momentum”. This performance and the positive decisions made by the four rating agencies over the past few weeks bode very well for the end-of-year renewal period”.
Titre du bloc
Read the PDF 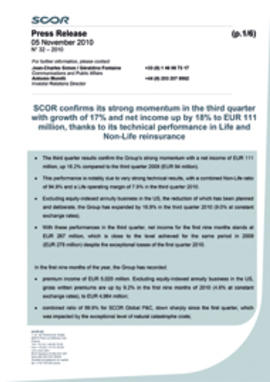