Body
SCOR continues to combine growth, profitability and solvency in 2010:
The proposed dividend on 2010 earnings is EUR 1.10 per share1, representing a payout ratio of 47%. In 2010, total returns for SCOR shareholders, notably including the EUR 1 per share dividend paid on 2009 earnings, stand at 15.3%.
These results confirm SCOR’s strategy, centred on strong technical performance in Life and Non-Life reinsurance, with significant business and geographical diversification:
SCOR’s position in the various reinsurance markets was steadily strengthened in 2010, with a reinforced or new presence in certain countries or lines of business. For example, SCOR obtained a licence to write Life reinsurance business in China, adding to the Group’s Non-Life licence in this strategic market.
SCOR’s rigorous and dynamic asset management policy generates a net return on invested assets of 3.8% in 2010 (excluding funds withheld by cedants), vs. 2.7% in 2009, in spite of very low prevailing interest rates. The Group limited exposure to risks it had identified, such as sovereign debt problems in Europe. Moreover, its strategic asset allocation enables it to seize market opportunities.
In Q4 2010 alone, SCOR continues to see strong growth and profitability:
Denis Kessler, Chairman and Chief Executive Officer of SCOR, comments: “SCOR records very good performances in 2010 across all lines of business. The record net income of EUR 418 million enables the Group’s management to propose a dividend of EUR 1.10 per share, representing an increase of 10% compared to the previous year and an unchanged payout ratio. SCOR’s strategy, based on a controlled risk appetite, strengthening the franchise, balanced development between Life and Non-Life business, and significant geographic and business diversification, has been crowned with success.

After the conclusion of our plan “Dynamic Lift V2”, last September we launched a new strategic plan, “Strong Momentum”, for the period from 2010-2013. We will achieve the ambitious profitability and solvency objectives set out in this plan through the mobilisation of all our teams, the support of our clients and the confidence of our shareholders.”

1 Proposal submitted to the Shareholders’ Annual General Meeting on 4 May 2011 for approval. 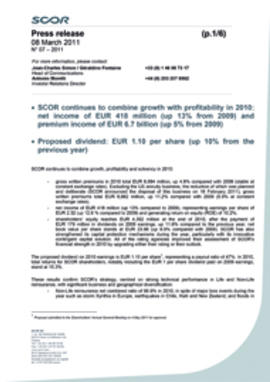