Denis Kessler, Chairman & Chief Executive Officer of SCOR, comments: “SCOR records a very solid performance in the first nine months of 2018. Excluding the impact of the U.S. tax reform, the Group has exceeded the targets set out in the plan “Vision in Action”, despite the numerous natural catastrophes that took place across various regions in the third quarter. This performance bears witness to the relevance of our strategy, which is based on a controlled risk appetite, a disciplined underwriting policy and an effective capital shield. The Group is in very good shape and well on track to meet the targets of “Vision in Action”.”

[1] Excluding the impact of U.S. tax reform (which was fully recognized in the second quarter of 2018). The full implementation of the new operational structure is still expected to occur before year-end, subject to standard regulatory approvals. 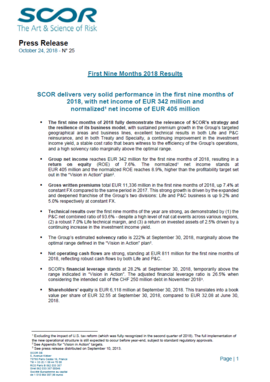