Body
SCOR posts record net income of EUR 549 million and an ROE of 11.5% in 2013, and proposes a dividend of EUR 1.30 per share1.
SCOR has continued to consistently apply its well-defined strategy and delivers a record level of net income in 2013, while maintaining a strong level of solvency.
Image

The final quarter of 2013 was again very active for SCOR, including the successful closing and integration of the Generali US acquisition6, the signing of an innovative longevity transaction7, and the renewal and significant improvement of the innovative contingent capital facility8. These numerous developments, which underline the Group’s high level of profitability and solvency, have led to S&P awarding a positive outlook to the Group’s A+ rating9, and to financial market recognition, with a stock price return of 30% and Total Shareholder Returns (TSR)10 of 36% in 2013.
The current year is also off to a promising start, with the implementation of SCOR’s first sidecar facility, “Atlas X”11, and a strong performance in the January renewals12.
Denis Kessler, Chairman & Chief Executive Officer of SCOR, comments: “Dynamic is the word that best describes the Group throughout 2013, in all our business areas. Thanks to the implementation of major projects, to successful organic as well as external growth, to a disciplined and innovative solvency policy and to the strengthening of our presence on the international market, SCOR has improved its positioning, its image and its reputation as a major reinsurance player. This positioning was reinforced by S&P awarding a positive outlook to our A+ rating. A record level of net earnings and strong ROE, while respecting a strong solvency position, are also a gratifying reflection of our efforts. Finally, 2013 was marked by the conclusion of the Group’s fourth strategic plan, “Strong Momentum”, for which all of the objectives were achieved, and by the launch of our new three-year plan,“Optimal Dynamics”. SCOR is well positioned for the current financial environment and reinsurance market developments.”

1 2013 dividend subject to approval of the Shareholders’ Annual General Meeting on May 6, 2014.

4 Ratio of available capital over SCR, projected solvency ratio including Generali US. 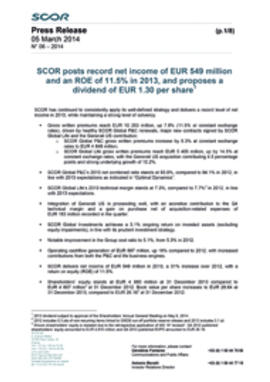