Body
For the full financial year 2019, SCOR Global P&C experienced a strong gross written premiums growth, of 15.8% at current exchange rates, to EUR 7.1 billion. This was driven both by Reinsurance (+16.2%) and Specialty Insurance (+14.4%).
At January renewals, SCOR secures an increase in reinsurance underwriting profitability of circa 1 percentage point, reflecting a 2.8% increase in pricing. Overall, the Reinsurance top line is voluntarily reduced by 4.7% of premiums up for renewal at constant exchange rates. As Reinsurance markets showed limited response to increasing loss trends, SCOR Global P&C took proactive measures to improve expected profitability, focusing mostly on reducing selected large quota share programs.
In Specialty Insurance, SCOR Global P&C witnesses a positive momentum, with rate increases averaging circa 15% for 2019, benefiting from an acceleration throughout the year. This allowed SCOR Global P&C to seize opportunities and to continue its profitable growth trend.
Given the growth rates of the business in 2019 and at January 1, 2020, SCOR Global P&C reiterates its strategic plan assumption of Gross Written Premiums annual growth comprised between 4% and 8% across “Quantum Leap”.
These January renewals demonstrate SCOR Global P&C’s proactive management and responsiveness to market conditions with contrasting strategies between its Reinsurance and Specialty Insurance underwriting platforms over the cycle.

The January 2020 renewals show consistent trends with those observed during 2019, with accelerating rate increases on commercial insurance and gradual rate increases on the reinsurance side. A main difference has been an increase in loss trends for which reinsurance price increases only partially compensated. After a record three-year period of natural catastrophes losses, demand for reinsurance remains robust. Nevertheless, pricing gaps persist, as the reinsurance market capacity remains abundant and emerging risks such as climate change and social inflation are still to be fully incorporated into reinsurance prices.
In this context, SCOR has built on its longstanding client relationships to proactively manage the pricing cycle, focusing on business compliant with its profitability targets and risk appetite.

With its Specialty Insurance activity, SCOR is fully benefiting from the more favorable market environment and experienced double-digit rate increases throughout 2019 and confirmed at January 1, 2020. Such an outcome further demonstrates the relevance of SCOR’s fully equipped 360° risk-taking platform, as outlined in the “Quantum Leap” strategic plan.
Looking forward to the April, June & July renewals, the market is expected to stay firm, with the possibility of further hardening as loss affected contracts come up for renewal. SCOR will rebuild the sustained profitability of its Japanese portfolio based on its long-standing client relationships.  Given its modest US casualty portfolio, SCOR is well positioned to benefit from further market changes arising from upcoming US renewals.

For the full year 2019, SCOR Global P&C experienced a strong gross written premiums growth, of 15.8% at current exchange rates, to EUR 7.1bn. This was driven both by Reinsurance (+16.2%) and Specialty Insurance (+14.4%). The growth arises from the strong 2019 successive renewals, and also benefits from the very robust H2 2018 renewals particularly in the US.
SCOR estimates the cost of natural catastrophes in Q4 2019 at EUR 343 million after retrocession and before tax.
The fourth quarter of 2019 has registered a high severity of natural catastrophe events worldwide, in particular coming from typhoons in Japan. SCOR estimates the cost of Japanese typhoon Hagibis at EUR 227 million after retrocession and before tax based upon cedants’ information and assuming an insured market loss in the region of USD 8 billion. Our efficient retro program would allow SCOR to materially dampen the increase in the loss, should Hagibis deviate beyond our current estimate of market loss assumption.
Following an upward market loss revision of Japanese typhoon Faxai and the impact of other events during the fourth quarter, SCOR estimates the cost of Q4 2019 QTD natural catastrophes at EUR 343 million after retrocession and before tax, and at EUR 665 million after retrocession and before tax for the full year. While remaining within SCOR’s risk appetite and thanks to its efficient capital shield policy, SCOR Global P&C expects to record an actual net combined ratio below 100% for full year 2019, including natural catastrophe costs. In 2019, SCOR continues to demonstrate its shock-absorbing capacity and pursues the execution of its strategic plan “Quantum Leap” with a very strong solvency position and an unchanged dividend policy.
Jean-Paul Conoscente, CEO of SCOR Global P&C, comments: “As the reinsurance market did not fully react to loss perspectives as we had initially anticipated, SCOR maintains a disciplined underwriting approach as evidenced during the January 2020 renewals. Despite plentiful reinsurance capacity, persistently low interest rates and upward expected losses, SCOR significantly improves its P&C profitability, while accompanying the growth of its key reinsurance clients. Thanks to its Specialty Insurance arm, SCOR leverages further the hardening witnessed in commercial lines, expected to continue throughout the year. Given that the January 2020 renewals are focused on EMEA with benign loss experience, we expect more pronounced favorable market conditions through the spring/summer 2020 renewals and maintain our “Quantum Leap” assumptions for the duration of the plan.”
Titre du bloc
Read the PDF
Visuel 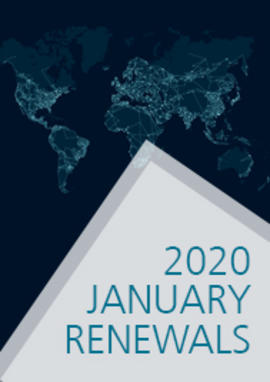