1. In a competitive environment, SCOR is benefiting from recent developments in the reinsurance markets

The reinsurance market is currently affected by the exceptional climatic events that took place in 2005, as well as by the tightening of the retrocession market. In addition to this, the tendency observed on certain insurance markets over the past few years towards an increased retention by cedants, a higher level of recourse to non proportional coverage and consolidation through mergers and acquisitions, has been confirmed. This has resulted in a reduced volume of reinsurance on the most mature markets.
In this context, the SCOR Group has applied itself to:
(i) regaining shares on treaties already in its portfolio, benefiting from the longterm relationships it has with its clients as well as from the upgrade of its rating to “A-, stable outlook” by Standard & Poor’s,
(ii) redeveloping its client base by regaining 120 cedants and consolidating its relationships with existing clients by accepting new business, whilst developing the technical and financial innovation of its underwriting teams in the face of a more complex market, as well as their responsiveness in a market that only straightened itself out at the end of December,
(iii) benefiting from the ALEA Europe renewal rights acquired on 10 December 2005, in accordance with its underwriting policy. These rights represented a written premium volume for SCOR of EUR 61 million at 1 January 2006.
During the 2006 renewals, the SCOR Group ensured that it stuck to its underwriting policy centred on profitability and on the quality of business underwritten. The Group has refused to underwrite business that does not meet its underwriting criteria, choosing for example to suspend relations with 39 of its Non-Life treaty clients.

2. SCOR is making significant progress on all of the Non-Life reinsurance markets

The renewals at 1 January 2006 involved 80% of the Property & Casualty and Liability treaty portfolio, 30% of Large Corporate Accounts business and almost the entire Credit & Surety portfolio.

During these renewals, the rates observed across the various markets increased slightly and are currently at a satisfactory level.

The renewals in Europe on 1 January 2006 involved 97% of the zone’s Non-Life treaties. In a satisfactory pricing environment, the Group recorded an increase of 26% for gross written premiums in Europe in 2006, bringing the total to EUR 746 million.
The Group gained or regained many clients, including several lead underwriting positions. With its existing clients, it increased its shares and signed new contracts.

Renewals in North America at 1 January 2006 involved 62% of the zone’s Property & Casualty treaty portfolio. Written premiums were up by 19% to EUR 104 million in this zone, however contrasting developments were observed between the United States and Canada:
The remainder of the North American treaties will be renewed on 1 July.

On Asian treaties up for renewal at 1 January 2006 (which is less than 30% of the zone’s portfolio), SCOR recorded an increase of 54% in gross written premiums, bringing the total to EUR 31 million.
The Group regained shares and won new clients in Malaysia and China. The upgrade of the Group’s rating enabled SCOR to recommence its activity in Australia.
Treaties in Japan and Korea, which represent a very significant share of the zone’s business, will be renewed on 1 April 2006.

Non-Life Treaties in other countries

The rest of the world zone includes the Middle East, Africa and South America. With regard to treaties in this zone up for renewal at 1 January 2006 (i.e. 65% of the zone’s portfolio), SCOR recorded an increase of 12% in gross written premiums, bringing the total to EUR 96 million.

Renewals of Credit & Surety treaties at 1 January 2006 involved almost the entire portfolio. Written premiums were up by around 35% to EUR 63 million. The upgrade of the Group’s rating and the strategic choice of business development in this field have enabled SCOR to retake its place as a first class player. Over half of this increase consisted of new business.

These renewals at 1 January 2006, along with the renewals estimated for the rest of the year, mean that P&C Treaties and Credit & Surety can anticipate a gross written premium volume of around EUR 1,250 million for 2006.

Renewals for facultative cover in this sector are carried out throughout the year without any particular periodicity.
At the end of 2005, 30% of the renewable portfolio was up for renewal. Gross written premium volume recorded an increase of 45% to EUR 91 million.
This significant increase is firstly due to improved access to business, following the upgrade of the Group’s rating. It is also the consequence of an increased rigidity in insurance/reinsurance conditions in certain market sectors where SCOR has a strong presence, such as the Energy risks sector.
Image

These renewals at the end of 2005 and the renewals estimated for the rest of this year mean that Large Corporate Accounts can anticipate a gross written premium volume of around EUR 350 million for 2006.

In life reinsurance, business is underwritten throughout the year. The increase in premium volume for business up for renewal at 1 January 2006, representing around 50% of SCOR’s Life reinsurance portfolio, was 5%.

The activity forecast for Life Reinsurance depends largely on American underwriting, which is particularly sensitive to developments in the Group’s rating by AM BEST. 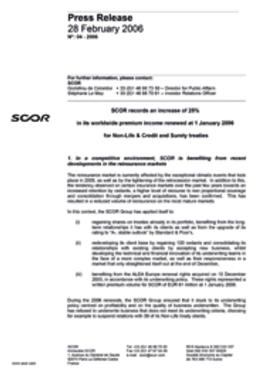 SCOR's Non- ...
Renouvellem ...
Subscribe to alerts
Stay up to date with all the latest from SCOR