Body
In this first half 2013, SCOR has demonstrated its ability to generate robust results and to cope with major natural catastrophes in the second quarter, in an economic environment that remains highly uncertain.
SCOR expects premium income to cross the EUR 10 billion threshold in 2013.
The Group is strengthening its position in the US Life reinsurance market through the successful acquisition of Generali US. This will give SCOR Global Life Americas (SGLA) the unique opportunity of becoming the leader in the US Life reinsurance market2, with a portfolio centred on mortality risks. This acquisition is fully in line with the targets and requirements defined by the Group in its strategic plan. The total cash consideration for this transaction stands at EUR 579 million3, plus the 2013 earnings through the closing date, representing a discount of approximately 35% to SCOR’s preliminary Embedded Value estimate of the Generali US in-force portfolio. This transaction is expected to close during the fourth quarter 2013. No results for Generali US are included in the SCOR 2013 first half results.
This first half 2013 has been rich in terms of developments for the Group, with the strengthening of its position on new markets and lines of business - for example the purchase of the BBVA mortality and disability portfolio in Spain and the acquisition of a controlling stake in the real estate company MRM. SCOR has also continued to reinforce its image as a top-tier reinsurer that is recognised on the global reinsurance market, as demonstrated by prestigious new awards (Denis Kessler was elected “Reinsurance Company CEO of the Year” at the Reactions London Market Awards, while SCOR was elected “Most Popular Foreign-Capital Insurance Company” 2013 at the fifth China International Insurance Summit).
Denis Kessler, Chairman and Chief Executive Officer of SCOR, comments: “SCOR’s positive results in the first half 2013 and its ability to absorb major natural catastrophes demonstrate, once again, the relevance and robustness of its business model based on four strategic pillars, namely a strong and diversified franchise, a mid-level risk appetite combined with a very comprehensive and solid Enterprise Risk Management policy, high diversification between Life and Non-Life business and an effective capital shield policy. All of SCOR’s teams are now mobilised to define the main objectives of the Group’s new strategic plan, which will be announced at the Investors’ Day on 4 September 2013”. 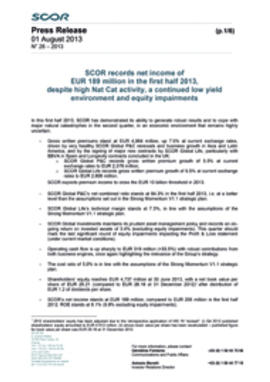