SCOR reinforces its central functions with several appointments, effective as of 1 October 2012.

Body
SCOR reinforces its central functions with several appointments, effective as of 1 October 2012.
Frieder Knüpling is promoted to Deputy Group Chief Risk Officer, reporting to Philippe Trainar, Group Chief Risk Officer. He is a member of the Group’s Executive Committee, and was previously Deputy Chief Executive Officer of SCOR Global Life.
Bruno Latourrette, Chief Actuary of SCOR Global Life, joins the Executive Committee of SCOR Global Life and takes over responsibility for SCOR Global Life’s Actuarial & Risk Modelling from Frieder Knüpling.
Mark Kociancic is promoted to Deputy Group Chief Financial Officer, reporting to Paolo De Martin, Group Chief Financial Officer. He was previously Chief Financial Officer of SCOR’s Americas Hub.
Paul Christoff, currently Chief Accounting Officer of SCOR US in the Americas Hub, is promoted to Chief Financial Officer of SCOR’s Americas Hub, replacing Mark Kociancic.
Sébastien Musset, previously Global Head of Compensation & Benefits / Labour Relations, is promoted to Group Human Resources Director, reporting to the Group Chief Operating Officer.
Denis Kessler, Chairman and CEO of SCOR, comments: “In view of the Group’s considerable development over the past few years, the Executive Committee has decided to strengthen its risk, finance and human resources functions, through the promotion of Group managers. The Executive Committee would particularly like to thank Frieder Knüpling for accepting these new responsibilities, after having made a major contribution to the development of SCOR Global Life and supported the Group’s efforts to prepare for Solvency II. Thanks to these efforts, SCOR is already one of the leaders in its sector in terms of risk management and modelling. Frieder Knüpling, along with all of the teams involved, will continue this momentum, thereby ensuring a very high level of ERM, which constitutes one of the pillars of SCOR’s business model.”
Information relating to the management team may be consulted on SCOR's website (www.scor.com/en/our-governance).
*
*    *
Frieder Knüpling (42), a German citizen, holds degrees in Mathematics and Physics from the Universities of Göttingen and Freiburg. He worked as a lecturer and research assistant at Freiburg University and several other colleges, until he received a PhD in Economics based on research on the econometric modelling of macroeconomic and financial data. From 1999 to 2002 he worked for Gerling-Konzern Globale Rückversicherungs-AG and its UK subsidiary, dealing with pricing and valuation. As of 2003 he headed the Corporate Actuarial & Treasury department of the Revios group. Since 2007 Frieder Knüpling has headed SCOR’s Corporate Actuarial Department, reporting to the Chief Risk Officer. He was appointed Deputy Chief Risk Officer of SCOR in December 2008, then Head of Financial & Actuarial of SCOR Global Life. Since July 2010, he has been Deputy CEO of SCOR Global Life and a Member of the Group Executive Committee. He is a fellow of the German Association of Actuaries (DAV).
Bruno Latourrette (42), a French citizen, is a graduate of the Ecole Polytechnique and the Ecole Nationale de la Statistique et de l’Administration Economique (ENSAE), and holds a Master of Science in Economics from the London School of Economics. Bruno Latourrette began his career at SCOR Global Life in 1996, in charge of actuarial studies. He was subsequently Chief Actuary at SCOR's Dallas subsidiary between 2001 and 2004, before becoming Senior Actuary at the Paris office in 2004. He was appointed head of Legal & General's actuarial department in France in 2005, before becoming Chief Actuary of SCOR Global Life in April 2008. Bruno Latourrette is a member of the French and American Societies of Actuaries.
Mark Kociancic (42), a Canadian citizen, is a graduate of the University of Toronto and holds a degree in commerce, finance and economics. He also holds a Chartered Accountant (CA) designation and a Chartered Financial Analyst (CFA) designation. Upon graduation in 1992, Mark Kociancic joined Ernst & Young within its Life and P&C insurance practice and has subsequently held progressively senior positions within the P&C industry with St Paul Guarantee, Avalon Risk Associates and Tokio Marine, prior to joining SCOR US as Senior Vice President & Chief Financial Officer in May 2006. He was appointed SCOR Americas HUB CFO in June 2008 and was promoted to Executive Vice President in July 2010.
Paul Christoff (41), a Canadian citizen, is a graduate of the University of Toronto, having obtained a degree in commerce and finance. He also holds a Chartered Accountant (CA) designation. Prior to joining SCOR in 2009, Paul Christoff held senior positions in the P&C industry, both in operations and finance. He is Vice President and Chief Accounting Officer of SCOR US in the Americas Hub.
Sébastien Musset (33), a French citizen, is a graduate of the Ecole Centrale Paris. From 2002 to 2009, he was successively Chief of Staff within the Executive Management team at AGF/Allianz, then, within the Human Resources department, HR Director incharge of Talent Management, Remuneration and cross sector functions. Within the HR department, he also led Allianz France’s operational transformation project from 2007 to 2009. He subsequently joined Credit Agricole Corporate& Investment Bank as Head of Divisional HR, before joining the SCOR group in September 2010 as Global Head of Compensation & Benefits / Labour Relations.
Titre du bloc
Read the PDF 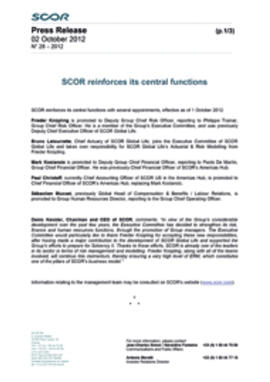