SCOR delivers excellent results with a net income of EUR 170 million and an annualized ROE of 11.2%

Denis Kessler, Chairman & CEO of SCOR, comments: “In the first quarter of 2016, SCOR continues to post excellent results, along the same lines as those recorded by the Group in 2015, benefiting from the full deployment of the initiatives launched under the “Optimal Dynamics” plan. SCOR’s footprint continues to expand in the first quarter, and both the Life and P&C divisions deliver strong technical profitability. SCOR Global Investments records a strong return on invested assets, demonstrating its capacity to actively manage the asset portfolio while remaining prudent in the current volatile environment. The reinsurance industry is facing economic, social and political uncertainties in 2016 in an increasingly competitive environment. Our teams are taking this fully into account in the preparation of the Group’s new strategic plan, which is due to be unveiled in September. Using our know-how, experience and expertise, SCOR is getting ready to meet the challenges of the future”.

3 Adjusted financial leverage ratio would be approximately 20.6% assuming the repayment of the CHF 650 million and EUR 257 million subordinated debts callable in Q3 2016, subject to the evolution of market conditions and supervisory approval.

4 The estimated adjusted solvency ratio of 202% allows for the intended calls of the two debts callable in Q3 2016 (the 6.154% undated deeply subordinated EUR 257 million notes callable in July 2016 and the 5.375% fixed to floating rate undated subordinated CHF 650 million notes callable in August 2016), subject to the evolution of market conditions and supervisory approval. The estimated solvency ratio based on Solvency II requirements is 222% at 31 March 2016. 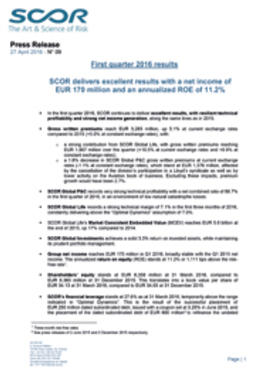