SCOR Group view on 2017:
In 2017, through the consistent execution of its strategy, SCOR is ideally positioned to continue its successful development:
Denis Kessler, Chairman & Chief Executive Officer of SCOR, comments: “In 2016, SCOR delivers a strong set of results, in line with the profitability and solvency targets of its new plan “Vision in Action”. SCOR has also enhanced its franchise, notably with the expansion of its Life footprint in Asia and the gain of additional market shares on the P&C side in the United States. In the meantime, the Group is pursuing innovative initiatives and developing new tools to improve its underwriting and management. SCOR is well on track to reach its strategic targets for “Vision in Action”. SCOR is actively pursuing its shareholder remuneration policy, raising its dividend to EUR 1.65, and now envisages share buy-backs.”

2 Record book value level since the launch of the strategic plan “Back on Track” in 2002.

4 2016 dividend subject to approval of the Shareholders’ Annual General Meeting on 27 April 2017.

6 After taking into account the impact of the French corporate tax rate decrease on deferred taxes. Excluding this impact, the 2016 Net income would be EUR 660 million. 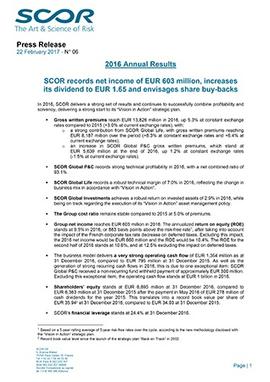